In the Wake of the Plague: The Black Death and the World It Made (Paperback) 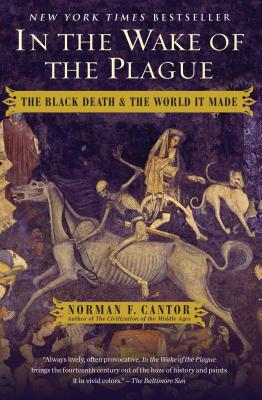 In the Wake of the Plague: The Black Death and the World It Made (Paperback)


Not On Our Shelves—Ships in 1-5 Days
A New York Times bestseller, In the Wake of the Plague is a fascinating study of the cultural and religious consequences of one of the deadliest tragedies to befall humanity: the black plague. Though rigorously scientific in his approach, Norman F. Cantor has produced an unforgettable narrative that in many ways employs the novelist’s skill for storytelling.

The Black Death was the fourteenth century’s equivalent of a nuclear war. It wiped out one-third of Europe’s population, and irrevocably changed the lives of those who survived. And yet, most of what we know about it is wrong. The details of the Plague etched in the minds of terrified schoolchildren—the hideous black welts, the high fever, and the awful end by respiratory failure—are more or less accurate. But what the Plague really was and how it made history remain shrouded in a haze of myths.

Here, Norman Cantor, the premier historian of the Middle Ages, draws together recent scientific discoveries and groundbreaking historical research to pierce the mist and tell the story of the Black Death as a gripping, intimate narrative. By focusing on twenty pivotal figures from the time, Cantor shows the lasting influence the Plague has had on history, culture, and religion.

“Professor Cantor’s style is easy—no jargon. He is far beyond just knowing his period; he understands it and so he can explain, without oversimplifying, the variety and complexity of this great section of the West’s past” (The New Yorker).
Norman F. Cantor (1929–2004) was a professor of history, sociology, and comparative literature at New York University. Among his many academic honors are appointments as a Rhodes Scholar, Porter Ogden Jacobus Fellow at Princeton University, and Fulbright Professor at Tel Aviv University. He was nominated for the NBCC Award for Inventing the Middle Ages.