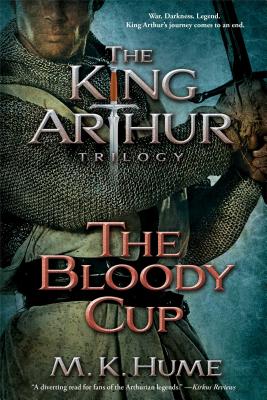 This is book number 3 in the The King Arthur Trilogy series.

From the author of The Merlin Prophecy, the historical trilogy that “appeals to those who thrill to Game of Thrones” (Kirkus Reviews)—the third installment in the epic, action-packed story of King Arthur.

Celtic Britain is on the brink of collapse, and the kingdom’s bloodiest days are upon it. For many years, the people of Britain have enjoyed peace and prosperity under the reign of King Arthur. But Arthur is now weakening with age, and the seeds of discontent are being sown.

Seeking to cleanse the land of Christian belief, dissenters need a symbol with which to legitimize their pagan claim and unite the malcontents. They seize upon the ancient Cup of Bishop Lucius of Glastonbury as a way of fragmenting Arthur’s hard-earned kingdom.

The ultimate threat to Arthur’s rule lies far closer to home: his own kin will betray him. Celt will slay Celt and the rivers will run with blood. Will all be lost, or can Arthur conquer the mounting forces before it’s too late?
M. K. Hume is a retired academic. She received her MA and PhD in Arthurian literature and is the author of The Merlin Prophecy, a historical trilogy about the legend of Merlin. She lives in Australia with her husband and two sons.