Investigating Simenon: Patriarchy, Sex and Politics in the Fiction (Paperback) 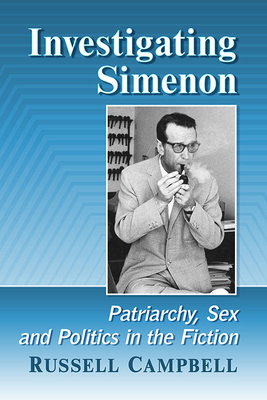 Investigating Simenon: Patriarchy, Sex and Politics in the Fiction (Paperback)


Backordered
For nearly a century, Belgian crime writer and psychological novelist Georges Simenon has captivated readers worldwide with his original character Chief Inspector Maigret. This investigation situates Simenon's work in its historical context and interprets it as a reaction to shifting gender relations in Western society. Simenon's compelling narratives capture the anxieties of men whose patriarchal position was under threat in an era of insurgent feminist movements. These concerns are also evident in Simenon's pervasive preoccupation with sexuality, as well as his political stance that stems from his petit-bourgeois upbringing. This groundbreaking study includes interwoven commentary on all 191 novels Simenon published under his own name, including several that have never been translated into English, as well as a number of short stories and several pseudonymous works.
Russell Campbell is an adjunct professor of film at Victoria University of Wellington, New Zealand. He is an award-winning scholar and documentary filmmaker.