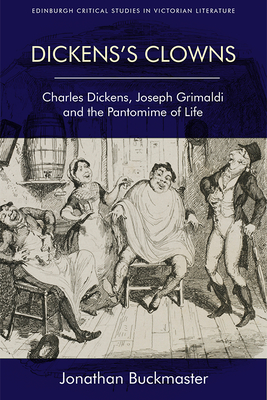 This book reappraises Dickens's Memoirs of Joseph Grimaldi and his imaginative engagement with its principal protagonist. Arguing that the Memoirs should be read as integral to Dickens's wider creative project on the theatricality of everyday existence, Jonathan Buckmaster analyses how Grimaldi's clown stepped into many of Dickens's novels.

Dickens's Clowns presents new readings of Dickens's treatment of topics such as identity, the grotesque and violence within the context of the tropes of the Regency pantomime. This is the first study to identify the Dickensian clown as a unifying force for several Dickensian themes, overturning traditional views of Dickens's clowns as peripheral figures.

Jonathan was an Honorary Research Fellow at the University of Buckingham from 2016 to 2018, and a Visiting Lecturer at Royal Holloway from 2012 to 2015. He was awarded his doctorate for his thesis on Charles Dickens and the pantomime clown in February 2013. His other research interests include Dickens's afterlives in cinema and television, the influence of Dickens's work on Salman Rushdie, and Wilkie Collins. Outside of academia, he has been a Technical Author for nearly twenty years.