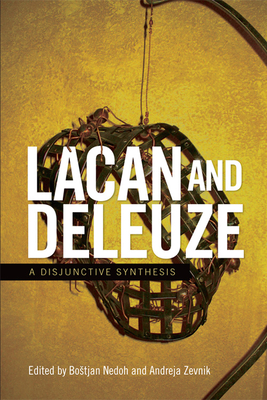 
Special Order—Subject to Availability
It is often said that Lacan is the most radical representative of structuralism, a thinker of negativity and alienation, whereas Deleuze is pictured as a great opponent of the structuralist project, a vitalist and a thinker of creative potentialities of desire. It seems the two cannot be further apart. This volume of 12 new essays, breaks the myth of their foreignness (if not hostility) and places the two in a productive conversation. By taking on topics such as baroque, perversion, death drive, ontology/topology, face, linguistics and formalism the essays highlight key entry points for a discussion between Lacan's and Deleuze's respective thoughts. The proposed lines of investigation do not argue for a simple equation of their thoughts, but for a 'disjunctive synthesis', which acknowledges their differences, while insisting on their positive and mutually informed reading.

Bostjan Nedoh is Research Assistant at the Institute of Philosophy, Scientific Research Centre of the Slovenian Academy of Sciences and Arts, Ljubljana. He has published extensively on Lacanian psychoanalysis, Italian biopolitical theory and contemporary French philosophy. Andreja Zevnik is Lecturer in International Politics at the University of Manchester. Her research interests include theories of subjectivity, political violence and resistance, aesthetic politics, law and psychoanalysis. She is a member of editorial board for the Journal of Narrative Politics. She recently published Lacan, Deleuze and World Politics: re-thinking the ontology of the political subject (Routledge, 2016) and Jacques Lacan Between Psychoanalysis and Politics (Ed. with Andreja Zevnik; Routledge 2015).