A History of the English-Speaking Peoples (Bloomsbury Revelations) (Paperback) 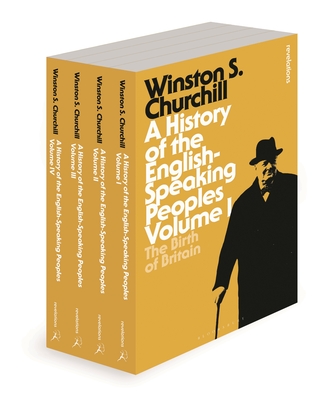 A History of the English-Speaking Peoples (Bloomsbury Revelations) (Paperback)

This history will endure; not only because Sir Winston has written it, but also because of its own inherent virtues -- its narrative power, its fine judgment of war and politics, of soldiers and statesmen, and even more because it reflects a tradition of what Englishmen in the hey-day of their empire thought and felt about their country's past. The Daily Telegraph

Spanning four volumes and many centuries of history, from Caesar's invasion of Britain to the start of World War I, A History of the English-Speaking Peoples stands as one of Winston S. Churchill's most magnificent literary works. Begun during Churchill's 'wilderness years' when he was out of government, first published in 1956 after his leadership through the darkest days of World War II had cemented his place in history and completed when Churchill was in his 80s, it remains to this day a compelling and vivid history. - The first volume - The Birth of Britain - tells the story of the formation of the British state.
- The second volume - The New World - explores the emergence of Britain on the world stage and a turbulent period at home.
- The third volume - The Age of Revolution Churchill charts the rise of Great Britain as a world power and the long rivalry with France, the shadow of the French Revolution, the rise of Napoleon and his defeat at Waterloo.
- The fourth and final volume - The Great Democracies - reaches the modern era.
Sir Winston S. Churchill (1874-1965) was Prime Minister of the United Kingdom on two occasions, from 1940-1945 and again from 1951 to 1955. Celebrated as one of the greatest leaders of the twentieth century, he was also a gifted orator, statesman and historian. The author of more than 40 books, he was awarded the Nobel Prize for Literature in 1953 and in 1963 was made an honorary citizen of the United States.