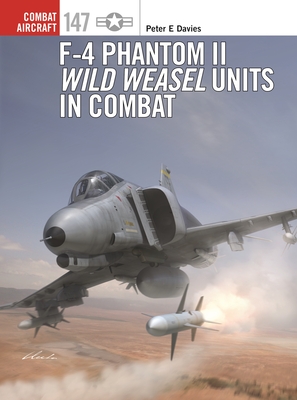 This is book number 147 in the Combat Aircraft series.

With first-hand insight into the into the key role of the US Air Force's fighter-bomber from the Vietnam War through to Operation Desert Storm during the First Gulf War, this book is an unmissable account of some of the most dangerous and demanding missions in the two wars.

The advent of the surface-to-air missile (SAM) in the early 1950s threatened the whole concept of aerial bombing from medium and high altitude. Countermeasures were developed during the Korean War, but with little initial success.

It was only in the closing stages of the Vietnam War, with the F-4Cww Phantom II (Wild Weasel 4), that this equipment started to become successful enough to allow a substantial investment in converting 116 F-4E Phantom IIs into dedicated SEAD aircraft. This move introduced a new generation of anti-radar missiles which became invaluable in later operations including operations Desert Shield, Desert Storm and Northern Watch over Iraq. This volume features dynamic archival photography from crews who flew the jet, alongside mission accounts and technical details of the development and fielding of the F-4 Wild Weasel in its various iterations.

Peter E Davies has published over 30 books for Osprey. He has specialized in the aircraft of the Vietnam and Cold War periods, analyzing tactics and technologies in combat situations. Original first-hand interviews and unpublished illustrative material are a hallmark of his work. Peter has also been a contributor to publications such as Aeroplane Monthly, Aviation News and Aircraft Illustrated.

Gareth Hector is a digital artist of international standing as well as an aviation history enthusiast. He lives in Perthshire, UK. Gareth has created the cover artwork for this title.

Jim Laurier is a native of New England, growing up in New Hampshire and Massachusetts. He has been drawing since he could hold a pencil and throughout his life he has worked in many mediums creating artwork on a variety of subjects. He has worked on the Osprey aviation list since 2000, and in that time he has produced some of the finest artwork seen in these volumes.