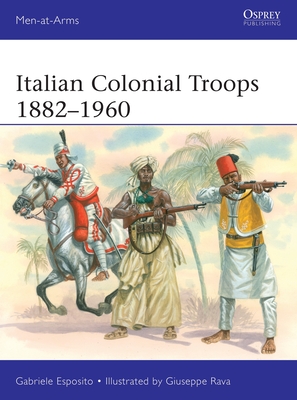 A complete illustrated study of the varied range of Italian colonial units who served in East and North Africa.

Italy only unified as a nation in 1870 and was late, and therefore impatient, in the 'scramble' for Africa. An initial foothold in Eritrea/Somalia, north-east Africa, led to a disastrous defeat in Ethiopia in 1896 at the Battle of Adwa, but Italian Somaliland was later consolidated on the west coast of the Red Sea. During 1911, Italy also invaded Libya, securing the coast, however fighting continued throughout World War I and only ended in the early 1930s. A number of native colonial regiments were raised in both Italian East Africa and Libya (in the latter, even a pioneering paratroop unit), of which most fought sturdily for Italy against the Allies in 1940–43. These units had particularly colourful uniforms and insignia. Another small guard unit also served in the Italian concession at Tientsin, China in 1902–1943. After World War II, a remnant unit served on in Somalia under a UN mandate until 1960.

This intriguing volume describes and illustrates the dress and equipment used by these forces and details how they were deployed to maintain a colonial empire for over half a century.

GABRIELE ESPOSITO is a professor of modern history, a freelance researcher and an author of
military history books, specializing in uniformology. His interests range from ancient civilizations to modern postcolonial conflicts including 19th-century Italian, Spanish and Latin American wars. His books and essays have been published by Pen & Sword, Winged Hussar and Libreria Editrice Goriziana and he contributes to a variety of specialist military-history journals. He has written various titles for Osprey including MAA 499 Armies of the War of the Triple Alliance 1864–70 and MAA 541 Armies of the War of the Grand Alliance 1688–97.

Giuseppe Rava was born in Faenza in 1963, and took an interest in all things military from an early age. Entirely self-taught, Giuseppe has established himself as a leading military history artist, and is inspired by the works of the great military artists, such as Detaille, Meissonier, Röchling, Lady Butler, Ottenfeld and Angus McBride. He lives and works in Italy.