When the Shooting Stopped: August 1945 (Hardcover) 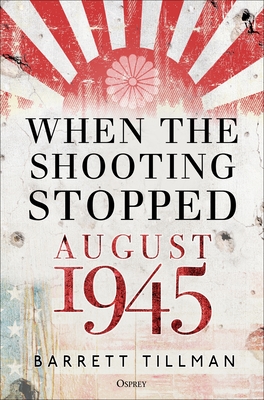 When the Shooting Stopped: August 1945 (Hardcover)

Victory in Japan Day (VJ Day) on August 15, 1945 officially marked the end of World War II, but in fact conflict continued throughout the month. This fascinating title from Barrett Tillman explore the final weeks of the war, until the shooting finally stopped.

In the 44 months between December 1941 and August 1945, the Pacific Theater absorbed the attention of the American nation and military longer than any other. Despite the Allied grand strategy of “Germany first,” after the Japanese attack on Pearl Harbor, the U.S. especially was committed to confronting Tokyo as a matter of urgent priority.

But from Oahu to Tokyo was a long, sanguinary slog, averaging an advance of just three miles per day. The U.S. human toll paid on that road reached some 108,000 battle deaths, more than one-third the U.S. wartime total. But by the summer of 1945 on both the American homefront and on the frontline there was hope. The stunning announcements of atomic bombs on Hiroshima and Nagasaki on August 6 and 9 seemed sure to force Tokyo over the tipping point since the Allies' surrender demand from Potsdam, Germany, in July. What few understood was the vast gap in the cultural ethos of East and West at that time. In fact, most of the Japanese cabinet refused to surrender and vicious dogfights were still waged in the skies above Japan.

This fascinating new history tells the dramatic story of the final weeks of the war, detailing the last brutal battles on air, land and sea with evocative first-hand accounts from pilots and sailors caught up in these extraordinary events. Barrett Tillman then expertly details the first weeks of a tenuous peace and the drawing of battle lines with the forthcoming Cold War as Soviet forces concluded their invasion of Manchuria. When the Shooting Stopped retells these dramatic events, drawing on accounts from all sides to relive the days when the war finally ended and the world was forever changed.

Barrett Tillman is an award-winning author and historian, with more than 40 nonfiction books as well as novels to his credit. He has lengthy ties to the US Air Force, Navy and Marine Corps, and the British Royal Navy, and has lectured at the Smithsonian and the Naval War College. He has had more than a dozen TV appearances on PBS, the History Channel, and C-Span. Barrett is based in Arizona.

“A superb achievement. This fast-paced and riveting account of the final weeks of the Pacific War is filled with fresh material, including personal stories and vivid historical detail. Another Barrett Tillman triumph.” - Robert J. Mrazek, award-winning author of 'The Indomitable Florence Finch: The Untold Story of a War Widow Turned Resistance Fighter and Savior of American POW's'

“[A] shrewd, fast-paced, and wide-angle account exploring one of the most intriguing but seldom pursued topics about all of World War II: the ragged ending of the Asia Pacific War. There was no neat finale on the decks of the Missouri in Tokyo Bay. This work musters the full panorama of days, weeks, and longer that shaped the fates of nations and peoples, but colors it brightly with well-chosen stories of individuals in combat, in liberation, in defeat, in tragedy, and in joy.” - Richard B. Frank, author of Downfall: The End of the Japanese Empire

“It's all here in this excellent account of the last month of WWII.” - The Armourer

“This is an excellent study of the last few weeks of the Second World War, showing that the surrender of Japan was a rather more complex and confused affair than the earlier collapse of Nazi Germany.” - John Rickard, Historyofwar.org

“It’s a complex story, very well told here… You learn a lot, change a few long-held assumptions. And it goes down relatively easily, because it’s so well-written” - New York Journal of Books

“For readers who wish to know the details of events that took place early- to mid-August, 1945, this is a great book. It is a wonderful addition to the World War II discussion, especially within the Pacific Theater.” - Epoch Times

“It's a good read, especially after the surrender when trigger-happy US troops began to occupy Japan…Enjoyed it.” - Russ Lockwood, HMGS

“For the casual military armchair buff, or very serious reader in search of genuine, meticulous scholarship, the book will be appreciated.” – ARGunners

“Only an author of Tillman’s experience, breadth and skill could pull off such a work: a multi-layered, nuanced and compelling look…When the Shooting Stopped is a fine work, worthy of the author’s reputation. Readable, informative, and compelling, it is deserving of the time to contemplate and absorb.” - Naval Historical Foundation