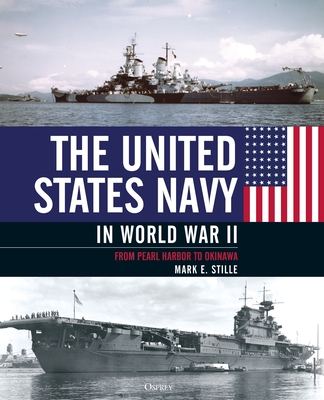 A comprehensive overview of the strategy, operations, and vessels of the United States Navy from 1941 to 1945.

Although slowly building its navy while neutral during the early years of World War II, the US was struck a serious blow when its battleships, the lynchpin of US naval doctrine, were the target of the dramatic attack at Pearl Harbor.

In the Pacific Theater, the US was thereafter locked into a head to head struggle with the impressive Imperial Japanese Navy, fighting a series of major battles in the Coral Sea, at Midway, the Philippine Sea, Leyte Gulf, and Okinawa in the struggle for supremacy over Japan. Having avoided the decisive defeat sought by the IJN, the US increased industrial production and by the end of the war, the US Navy was larger than any other in the world.

Meanwhile in the west, the US Navy operated on a second front, supporting landings in North Africa, Sicily, and Italy, and in 1944 played a significant part in the D-Day landings, the largest and most complex amphibious operation of all time.

Written by an acknowledged expert and incorporating extensive illustrations including photographs, maps, and color artwork, this book offers a detailed look at the strategy, operations, and vessels of the US Navy in World War II.

Mark E. Stille (Commander, United States Navy, retired) received his BA in History from the University of Maryland and also holds an MA from the Naval War College. He recently concluded a nearly 40-year career in the intelligence community including tours on the faculty of the Naval War College, on the Joint Staff and on US Navy ships. He is the author of numerous Osprey titles focusing on naval history in the Pacific.

"If you are looking for a complete single volume of USN ships in WWII, you will have found it with this book. You will not be disappointed." - Gunmart

"In this superbly illustrated and detailed work, naval expert Mark E. Stille combines new research and archival material to examine the carriers, battleships, cruisers, destroyers and submarines used by the US Navy throughout the war." - Warship World