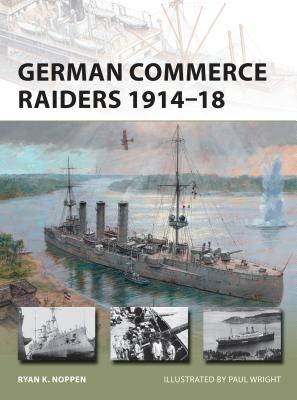 This is book number 228 in the New Vanguard series.

This is the story of Germany's commerce raiders of World War I, the surface ships that were supposed to starve the British Isles of the vast cargoes of vital resources being shipped from the furthest reaches of the Empire. To that end pre-war German naval strategists allocated a number of cruisers and armed, fast ocean liners, as well as a complex and globe-spanning supply network to support them - known as the Etappe network. This book, drawing on technical illustrations and the author's exhaustive research, explains the often overlooked role that the commerce raiders played in World War I. Whilst exploring the design and development of the ships, it also describes their operational history, how they tied up a disproportionate amount of the British fleet on lengthy pursuits, and how certain raiders such as the SMS Emden were able to wreak havoc across the oceans.
Ryan K. Noppen is a military author and consultant originally from Kalamazoo, Michigan and holds a Master of Arts degree in European History from Purdue University. He has worked as a naval and aviation subject matter expert on projects for the US Navy, taught college courses in military history, and has served as the headmaster of a Classical grammar school. A scholar of Dutch, German, and Central European military history, he has published a major history of Dutch air power and has written several titles for Osprey. He lives in California, USA.

Paul Wright has painted ships of all kinds for most of his career, specializing in steel and steam warships from the late 19th century to the present day. Paul's art has illustrated the works of Patrick O'Brian, Dudley Pope and C.S. Forester amongst others, and hangs in many corporate and private collections all over the world. A Member of the Royal Society of Marine Artists, Paul lives and works in Surrey.
". . . this is a valuable book." - Northern Mariner