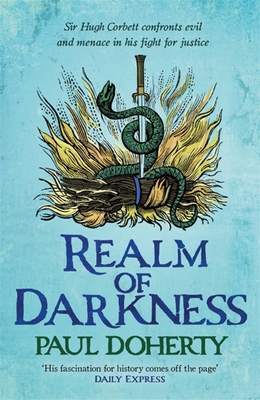 Paul Doherty's twenty-third medieval mystery featuring Sir Hugh Corbett is a gripping and gruesome tale of murder and mayhem sure to appeal to fans of C. J. Sansom and Bernard Cornwell.

Spring, 1312. Edward II of England is absorbed with his favourite, Peter Gaveston, while his young wife, Isabella, is about to give birth. Isabella's father, the ruthless Philip of France, dreams of a grandson wearing the Crown of the Confessor and starts to meddle - even if that means murder...
Amaury de Craon, Philip's Master of Secrets, is despatched to carry out his deadly deeds and Edward II summons Sir Hugh Corbett, Keeper of the Secret Seal, to intercept. Both master spies lodge at the Benedictine abbey of St Michael's in the forest of Ashdown. Supposedly a house of prayer, the abbey holds sinister secrets and treasures which include the world's most exquisite diamond, The Glory of Heaven. However, shortly after their arrival, the diamond is stolen and its guardian murdered. Other macabre incidents follow, Satan is seen walking through God's Acre and a nearby tavern is burnt to the ground and no one escapes. Corbett, assisted by his henchmen, prepares to navigate this hazardous maze of murder...

What readers say about Paul Doherty:
'Good plots, clever twists and mostly impossible to work out'
'Paul Doherty's depictions of medieval England are truly outstanding'
'Another brilliant story in the excellent Hugh Corbett series by a superb historical author'

Paul Doherty was born in Middlesbrough. He studied History at Liverpool and Oxford Universities and obtained a doctorate for his thesis on Edward II and Queen Isabella. He is now headmaster of a school in north-east London and lives with his family in Essex.

His fascination for history comes off the page

Paul Doherty has a lively sense of history . . . evocative and lyrical descriptions—New Statesman

An opulent banquet to satisfy the most murderous appetite—Northern Echo