Defining a Nation: India on the Eve of Independence, 1945 (Paperback) 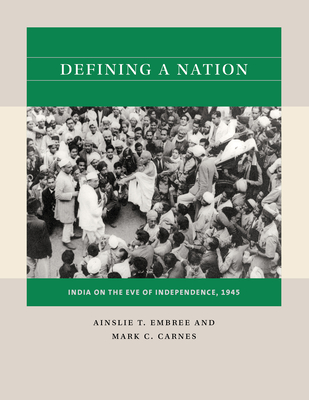 Defining a Nation: India on the Eve of Independence, 1945 (Paperback)


Not On Our Shelves—Ships in 1-5 Days
Defining a Nation is set at Simla, in the foothills of the Himalayas, where the British viceroy has invited leaders of various religious and political constituencies to work out the future of Britain's largest colony. Will the British transfer power to the Indian National Congress, which claims to speak for all Indians? Or will a separate Muslim state--Pakistan--be carved out of India to be ruled by Muslims, as the Muslim League proposes? And what will happen to the vulnerable minorities--such as the Sikhs and untouchables--or the hundreds of princely states? As British authority wanes, tensions among Hindus, Muslims, and Sikhs smolder and increasingly flare into violent riots that threaten to ignite all India. Towering above it all is the frail but formidable figure of Gandhi, whom some revere as an apostle of nonviolence and others regard as a conniving Hindu politician. Students struggle to reconcile religious identity with nation building--perhaps the most intractable and important issue of the modern world. Texts include the literature of Hindu revival (Chatterjee, Tagore, and Tilak); the Koran and the literature of Islamic nationalism (Iqbal); and the writings of Ambedkar, Nehru, Jinnah, and Gandhi.
Ainslie T. Embree was professor of history emeritus at Columbia University. Mark C. Carnes is professor of history at Barnard College.