The Haitians: A Decolonial History (Paperback) 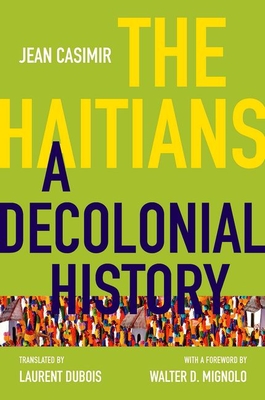 The Haitians: A Decolonial History (Paperback)


Not On Our Shelves—Ships in 1-5 Days
In this sweeping history, leading Haitian intellectual Jean Casimir argues that the story of Haiti should not begin with the usual image of Saint-Domingue as the richest colony of the eighteenth century. Rather, it begins with a reconstruction of how individuals from Africa, in the midst of the golden age of imperialism, created a sovereign society based on political imagination and a radical rejection of the colonial order, persisting even through the U.S. occupation in 1915.

The Haitians also critically retheorizes the very nature of slavery, colonialism, and sovereignty. Here, Casimir centers the perspectives of Haiti's moun andeyo--the largely African-descended rural peasantry. Asking how these systematically marginalized and silenced people survived in the face of almost complete political disenfranchisement, Casimir identifies what he calls a counter-plantation system. Derived from Caribbean political and cultural practices, the counter-plantation encompassed consistent reliance on small-scale landholding. Casimir shows how lakou, small plots of land often inhabited by generations of the same family, were and continue to be sites of resistance even in the face of structural disadvantages originating in colonial times, some of which continue to be maintained by the Haitian government with support from outside powers.
Jean Casimir, who served as Haitian ambassador to the United States and as a United Nations official, is professor of humanities at the University of Haiti; his most recent book is Haiti et ses elites. Laurent Dubois is professor of romance studies and history at Duke University; his most recent book is Freedom Roots: Histories from the Caribbean, with Richard Turits. Walter D. Mignolo is William H. Wannamaker Professor of Romance Studies in Trinity College of Arts and Sciences and Professor of Literature at Duke University. He is author or editor of several books, including The Darker Side of Western Modernity: Global Futures, Decolonial Option.