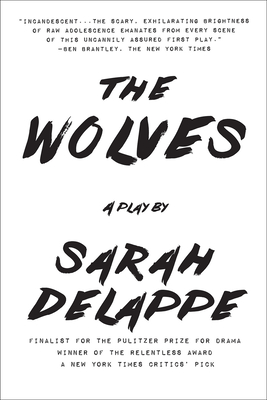 
Not On Our Shelves—Ships in 1-5 Days
“Incandescent. . . . The scary, exhilarating brightness of raw adolescence emanates from every scene of this uncannily assured first play.” —Bent Brantley, New York Times

One of the most-talked about new Off-Broadway plays of the last twenty years, and a finalist for the Pulitzer Prize for Drama, Sarah DeLappe’s The Wolves opened to enthusiastic acclaim, including two sold-out, extended runs at The Playwrights Realm/The Duke on 42nd Street.

The Wolves follows the nine teenage girls—members of an indoor soccer team—as they warm up, engage in banter and one-upmanship, and fight battles big and small with one another and themselves. As the teammates warm up in sync, a symphony of overlapping dialogue spills out their concerns, including menstruation (pads or tampons?), is Coach well?, eating disorders, sexual pressure, the new girl, and the Khmer Rouge (what it is, how to pronounce it, and do they need to know about it—“We don’t do genocides ’til senior year.”)

By season’s and play’s end, amidst the wins and losses, rivalries and tragedies, they are warriors tested and ready—they are The Wolves.

Playwright DeLappe writes in her preface, “I wrote this play in a sports bra. I am not an athlete in my current life and hadn’t worn one since high school. I would take off my shirt, take off my bra, pull the sports bra over my chest, and sit to write. I overshare not to advocate for method writing (although . . .) but to suggest just what sort of play this play was from the start. Physical. Concerned with the body, with women’s bodies, not as eye candy or symbolic vessels but as muscular, dexterous, capable, contradictory, and fallible individuals.”

DeLappe’s debut is a wonderful piece of theater that features strong young women “going to war” in suburban America—through the lens of a high school soccer team. It is a triumph of insight and energy into what it takes for young women to come of age.