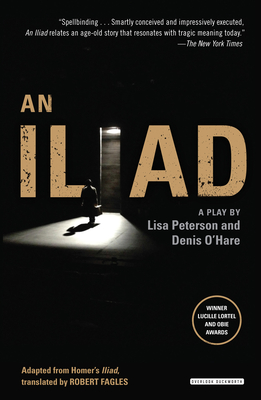 
Special Order—Subject to Availability
From Robert Fagles’s acclaimed translation, An Iliad telescopes Homer’s Trojan War epic into a gripping monologue that captures both the heroism and horror of war. Crafted around the stories of Achilles and Hector, in language that is by turns poetic and conversational, An Iliad brilliantly refreshes this world classic. What emerges is a powerful piece of theatrical storytelling that vividly drives home the timelessness of mankind’s compulsion toward violence.
Lisa Peterson is a nationally renowned director who works in NYC and regional theatres around the country. She was for ten years Resident Director at the Mark Taper Forum. She won an Obie Award for her direction of Caryl Churchill s" Light Shining in Buckinghamshire "at New York Theatre Workshop.

Denis O Hare is a writer and Tony Award-winning actor who has performed on Broadway and off-Broadway as well as in numerous regional productions and in film and television. His TV work includes roles on HBO s "True Blood" and FX s "American Horror Story.""