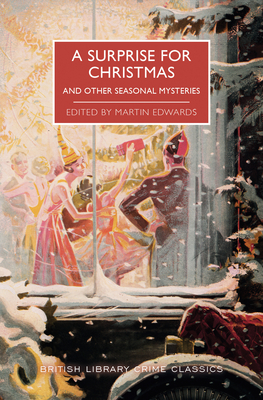 A Postman murdered while delivering cards on Christmas morning. A Christmas pine growing over a forgotten homicide. A Yuletide heist gone horribly wrong. When there's as much murder as magic in the air and the facts seem to point to the impossible, it's up to the detective's trained eye to unwrap the clues and neatly tie together an explanation (preferably with a bow on top).

Martin Edwards has once again gathered the best of these seasonal stories into a stellar anthology brimming with rare tales, fresh as fallen snow, and classics from the likes of Julian Symons, Margery Allingham, Anthony Gilbert and Cyril Hare. A most welcome surprise indeed, and perfect to be shared between super-sleuths by the fire on a cold winter's night.

Martin Edwards is an award-winning crime writer best known for two series of novels set in Liverpool and the Lake District. He is series consultant for British Library Crime Classics, the Vice Chair of the Crime Writers' Association, and President of the Detection Club. The Golden Age of Murder, his study of the Detection Club, was published in 2015 to international acclaim, and has been nominated for both the Edgar and Agatha awards for the year's best book about the genre. He received the CWA 2020 Diamond Dagger Award for sustained excellence in crime writing and significant contributions to the genre, joining the ranks of Sue Grafton, Ian Rankin, and Lee Child.
"Edwards's exceptional fourth anthology of golden age Christmas-themed mysteries (after 2018's The Christmas Card Crime and Other Stories) features tales from heavy hitters such as G.K. Chesterton and Julian Symons. " — Publishers Weekly

"With perfectly sized stories for stolen moments during a busy season, there's something for everyone in this well-curated anthology." — Library Journal