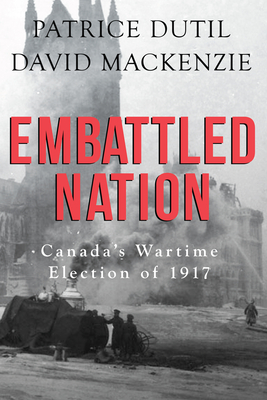 
Not On Our Shelves—Ships in 1-5 Days
Embattled Nation explores Canada's tumultuous wartime election of 1917 and the people and issues that made it a pivotal moment in Canadian history.

Embattled Nation explores the drama of Canada's tumultuous election of 1917. In the context of the bloody battles of Vimy Ridge, Hill 70, Passchendaele, and of the Halifax explosion, Sir Robert Borden's Conservative government introduced conscription and called for a wartime election. Most Liberals, led by Sir Wilfrid Laurier, opposed compulsory military service, while in Quebec a new movement emerged to contest the Canadian government's attitude and policy. To survive and win the election, Prime Minister Borden resorted to unprecedented measures that tested the fabric of Canadian democracy.
Patrice Dutil is professor of politics and public administration at Ryerson University and the president of the Champlain Society. He is the author and editor of many books on Canadian politics. He lives in Toronto. David MacKenzie is professor of history at Ryerson University and the author of several books on Canadian history and international relations. He lives in Toronto.