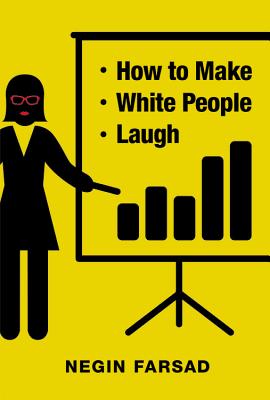 
Not On Our Shelves—Ships in 1-5 Days
From the acclaimed writer, director, and star of the hit documentary The Muslims are Coming! comes a memoir in essays about growing up Iranian-American in a post-9/11 world and the power of comedy to combat racism.

Negin Farsad is an Iranian-American-Muslim female stand-up comedian who believes she can change the world through jokes. And yes, sometimes that includes fart jokes. In this candid and uproarious book, Farsad shares her personal experiences growing up as the "other" in an American culture that has no time for nuance. In fact, she longed to be black and/or Mexican at various points of her youth, you know, like normal kids. Right? RIGHT?

Writing bluntly and hilariously about the elements of race we are often too politically correct to discuss, Farsad takes a long hard look at the iconography that still shapes our concepts of "black," "white," and "Muslim" today-and what it means when white culture defines the culture. Farsad asks the important questions like, What does it mean to have a hyphenated identity? How can we actually combat racism, stereotyping, and exclusion? Do Iranians get bunions at a higher rate than other ethnic groups? (She's asking for a friend.)

How to Make White People Laugh tackles these questions with wit, humor, and incisive intellect. And along the way, you might just learn a thing or two about tetherball, Duck Dynasty, and wine slushies.

Negin Farsad is an American comedian, actor, writer, and filmmaker of Iranian descent based in New York City. Like most comedians, she has a master's degree in African-American studies. She was named one of the 53 Funniest Women by the Huffington Post, one of 10 Feminist Comedians to Watch by Paper magazine, and was selected as a TEDFellow for her work in social justice comedy.

She has written for and appeared on Comedy Central, MTV, PBS, IFC, Nickelodeon, and others. She is director/producer of the feature films Nerdcore Rising starring Weird Al Yankovic and The Muslims Are Coming! starring Jon Stewart, David Cross, and Lewis Black (both available on Netflix). Her film 3rd Street Blackout, starring Janeane Garofalo and Ed Weeks, was released in 2016.
"This book is more than funny-it's on David Sedaris-level first-class perfect fucking hilarious funny. I laughed so hard, I made a spectacle of myself."—Julia Sweeney, Comedian, Writer, and former SNL cast member

"A hilarious and personal take on the complexities of being non-white in America today. This book makes racial politics a bit easier to swallow."—Reza Aslan, bestselling author of No god but God and Zealot

"Apparently, Negin did not spend her childhood in the Irish countryside. She was never a beat jazz innovator, and her marriage to Douglas Fairbanks was unconsummated. This long overdue book not only 'sets the record straight' but also improves the whole structure of society. I thank Ms. Farsad for that. You should do the same."—Janeane Garofalo, Comedian

"Negin Farsad whips out some smart racial politics . . . with a side of fart jokes and the result is a hilarious and pungent book."—Aasif Mandv, Daily Show correspondent, actor and author of No Land's Man

"Farsad's fresh and funny voice is perfect for presenting tactics to fight anti-Muslim sentiment in the U.S., and her work is intriguing and enjoyable to read."—Publisher's Weekly

"How to Make White People Laugh will help answer some of the questions people have been too scared to ask. And get you laughing."—Refinery29

"Hilarious and groundbreaking...Farsad carves out a new space to talk about cultural and political identity."—BookWitty.com