Uncontainable: How Passion, Commitment, and Conscious Capitalism Built a Business Where Everyone Thrives (Hardcover) 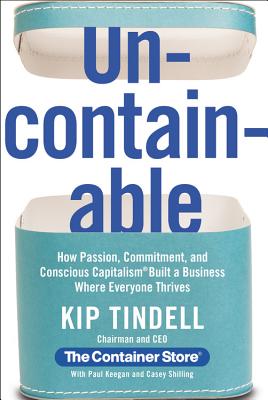 Uncontainable: How Passion, Commitment, and Conscious Capitalism Built a Business Where Everyone Thrives (Hardcover)

By Kip Tindell, Casey Shilling (With), Paul Keegan (With)


Special Order—Subject to Availability
Kip Tindell, the founder and CEO of The Container Store, reveals the seven secrets to keeping both customers AND employees happy and all fully engaged.

"You're going to sell what? Empty Boxes?"

Back in 1978, Kip Tindell (Chairman & CEO of The Container Store) and his partners had the vision that people were eager to find solutions to save both space and time - and they were definitely onto something. A new category of the retailing industry was born - storage and organization. Today, with stores nationwide and with more than 5,000 loyal employees, the company couldn't be stronger. Over the years, The Container Store has been lauded for its commitment to its employees and focus on its original concept and inventory mix as the formula for its success. But for Tindell, the goal never has been growth for growth's sake. Rather, it is to adhere to the company's values-based business philosophies, which center on an employee-first culture, superior customer service and strict merchandising. The Container Store has been named on Fortune magazine's "100 Best Companies To Work For" list for 15 consecutive years. Even better, The Container Store has millions of loyal customers.

In Uncontainable, Tindell reveals his approach for building a business where everyone associated with it thrives through embodying the tenets of Conscious Capitalism. Tindell's seven Foundation Principles are the roadmap that drives everyone at The Container Store to achieve the goals of the company. Uncontainable shows how other businesses can adapt this approach toward what Tindell calls the most profitable, sustainable and fun way of doing business. Tindell is that rare CEO who fully embraces the "Golden Rule" of business - where all stakeholders - employees, customers, vendors, shareholder, the community - are successful through a harmonic balance of win-wins.
Kip Tindell is currently Chairman & CEO of The Container Store. He was presented with Ernst & Young's prestigious Entrepreneur of the Year award in 1991 and is a recipient of the National Retail Federation's 1998 Innovator of the Year Award. In 2006, along with wife Sharon Tindell (Chief Merchandising Officer) and Garrett Boone (Chairman Emeritus), Tindell was inducted into the Retailing Hall of Fame and he is a 2009 Junior Achievement of Dallas Business Hall of Fame inductee.

Most recently Tindell received the National Retail Federation's 2010 Gold Medal Award, the most coveted award in retail, given to individuals who have served the industry with distinction and achieved a national reputation for excellence. He serves on the board of Whole Foods Market (WFMI), the executive board of the National Retail Federation as its Vice Chairman and is on the Board of the Baylor Healthcare Systems Foundation. He is a leader and passionately involved in Conscious Capitalism, Inc.
"The Chairman and CEO of The Container Store Kip Tindell's new book, Uncontainable, is in the tradition of Yvon Chouinard's Let My People Go Surfing, Blake Mycoskie's Start Something That Matters, and Muhammad Yunus's Building Social Business. These are all leaders who believe that treating people with respect is the path to true success and have spread that message in really good books . . . In Uncontainable, Tindell clearly lays out The Container Store's path to streamlining that hard work, and he does it with writing as passionate and purposeful as you will find in any business book you'll read this year, or next year, or the year after that, or..."—800-CEO-READ

"The book is an enjoyable read that doesn't uniformly fall into the sometimes dry and buttoned-up business management genre. Tindell and his co-authors offer creative company-culture secrets and tips of the trade that can be applied to businesses in other industries. And, the book's jovial tone should be taken as a nod to the oft-overlooked idea that running a business can be fun, too."—D CEO Magazine