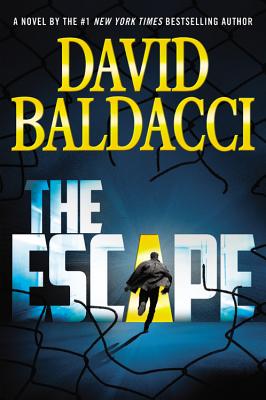 
Not On Our Shelves—Ships in 1-5 Days
Special Agent Puller's brother is the country's most wanted criminal, but his conviction points to a cover-up--and a dangerous enemy bent on burying the truth in this #1 New York Times bestselling thriller.

It's a prison unlike any other. Military discipline rules. Its security systems are unmatched. None of its prisoners dream of escaping. They know it's impossible...until now.

John Puller's older brother, Robert, was convicted of treason. His inexplicable escape from prison makes him the most wanted criminal in the country. Some in the government believe that John Puller represents their best chance at capturing Robert alive, and so Puller must bring in his brother to face justice.

But Puller quickly discovers that his brother is pursued by others who don't want him to survive. Puller is in turn pushed into an uneasy, fraught partnership with another agent, who may have an agenda of her own.

They dig more deeply into the case together, and Puller finds that not only are her allegiances unclear, but there are troubling details about his brother's conviction...and someone out there doesn't want the truth to ever come to light. As the nationwide manhunt for Robert grows more urgent, Puller's masterful skills as an investigator and strengths as a fighter may not be enough to save his brother--or himself.
DAVID BALDACCI is a global #1 bestselling author, and one of the world's favorite storytellers. His books are published in over forty-five languages and in more than eighty countries, with 150 million copies sold worldwide. His works have been adapted for both feature film and television. David Baldacci is also the cofounder, along with his wife, of the Wish You Well Foundation, a nonprofit organization dedicated to supporting literacy efforts across America. Still a resident of his native Virginia, he invites you to visit him at DavidBaldacci.com and his foundation at WishYouWellFoundation.org.
"One of the most compelling characters in David Baldacci's thrillers is John Puller, a crackerjack investigator of military crimes...Twists and turns come fast and furious in the best Baldacci tradition. The Escape is much more than a thriller. It's a moving tale of two military brothers and their father, a retired Army general and fighting legend now suffering from dementia. Emotionally intense, The Escape is Baldacci's best to date."—Associated Press

"A heck of an opening chapter, guaranteed to jettison readers into hours of addictive reading...Baldacci's last few books have been among the best in his long, busy career, and The Escape stands near the top for sheer adrenalin-fueled entertainment. It's alarmingly topical, too, taking us into the intelligence community and raising questions about privacy rights in the age of government surveillance and other buzz-worthy issues (no spoilers here). Indeed, the crime at the center of The Escape could have been pulled from recent newspaper headlines. Who says thrillers have to be the stuff of escapist fantasies?"—Richmond Times-Dispatch

"A phenomenal read, as usual, from David Baldacci--don't miss it!"—BookLoons.com

"David Baldacci has never been better than in 'The Escape.'"—Providence Journal