Listen to Bob Marley: The Man, the Music, the Revolution (Paperback) 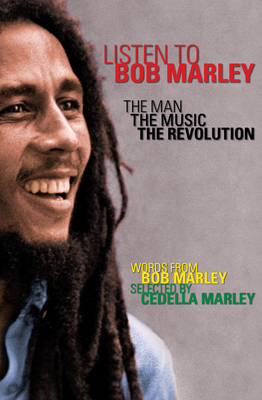 Listen to Bob Marley: The Man, the Music, the Revolution (Paperback)


Not On Our Shelves—Ships in 1-5 Days
An inspiring collection of poems, meditations, and lyrics by one of the world's most revered musical legends Bob Marley's music defined a movement and forever changed a nation. Known worldwide for their message of peace and unity, Marley's songs--from "One Love" to "Redemption Song" to "Three Little Birds"--have touched millions of lives. This collection is the best of Bob Marley presented in three parts: "The Man," giving an in-depth look into the life of Bob Marley; "The Music," comprising his most memorable lyrics as well as links to many of his songs in iTunes; and "The Revolution," containing his meditations on social equality and the Rastafari movement. Enriched with iconic photographs, Listen to Bob Marley provides insight into a reggae legend, the inspirational man behind the music.
Bob Marley (1945-1981) was one of the most beloved and bestselling musicians of his time. Born in the village of Nine Mile, Jamaica, Marley left school at fourteen to pursue music fulltime. A dedicated member of the Rastafari movement, Marley is credited with bringing reggae and Jamaican music to a world stage. Over the course of his career, he released more than a dozen albums with his band Bob Marley and the Wailers. The posthumous release of Legend (1984) went platinum in the United States and sold more than 25 million copies worldwide. Marley died from cancer in 1981.