Red Ink: Inside the High-Stakes Politics of the Federal Budget (MP3 CD) 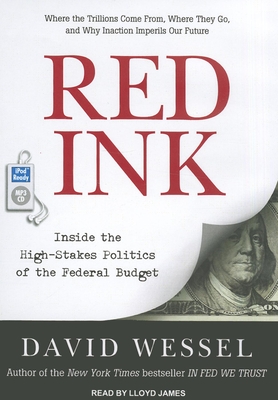 Red Ink: Inside the High-Stakes Politics of the Federal Budget (MP3 CD)


Special Order—Subject to Availability
(This book cannot be returned.)
In a sweeping narrative about the people and the politics behind the budget, Pulitzer Prize-winning reporter David Wessel looks at the 2011 fiscal year (which ended September 30) to see where all the money was actually spent, and why the budget process has grown wildly out of control. Through the eyes of key people Jacob Lew, White House director of the Office of Management and Budget; Douglas Elmendorf, director of the Congressional Budget Office; Blackstone founder and former Commerce Secretary Pete Peterson; and more Wessel gives listeners an inside look at the making of our unsustainable budget.
David Wessel is the economics editor of the "Wall Street Journal" and the author of the "New York Times" bestseller "In Fed We Trust."

Lloyd James has been narrating since 1996, has recorded over six hundred books in almost every genre, has earned six "AudioFile" Earphones Awards, and is a two-time nominee for the prestigious Audie Award.