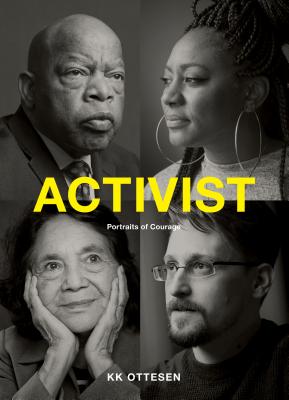 
In Stock—Click for Locations
A speech on the radio. A high school literature class. A promise made to a mother.
Activism begins in small ways and in unexpected places. In this inspiring book, over forty activists from Billie Jean King to Bernie Sanders and Angela Davis to Edward Snowden recount the experiences that sparked their journeys and share the beliefs that keep them going. These are citizens who met challenge with action. Their visions for peace, equality, and justice have reshaped American society—from voting to reproductive rights, and from the environment to the economy.
KK OTTESEN is an author and photographer who shares the stories of peoples' lives through first-person narrative interviews and photographic portraits. Through her work, she seeks to break down barriers and stereotypes and allow for the discovery and celebration of common ground. Ottesen is a regular contributor to the Washington Post magazine where her interviews and photographs have appeared for more than a decade; other credits include Esquire, Ms.com, and Washingtonian. Her previous book, Great Americans, explored what it means to be an American through interviews and photographs with everyday individuals who share names with some of the country's most famous and infamous icons. She lives in Washington, DC with her family. More of her work can be found at www.kkottesen.com or @kk.ottesen on social media.
“KK Ottesen’s Activist: Portraits of Courage has more than three dozen stories of fighters like Ralph Nader, Edward Snowden, and Angela Davis. They talk movingly about the first time they stood up, spoke out, and took sides” —New York Daily News

“Illustrated with remarkable new photographs, and full of pearls of wisdom and advice, Activist is a work of much-needed guidance and hope.” —Flavorwire