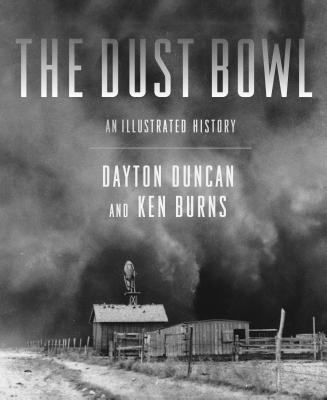 
Special Order—Subject to Availability
In this riveting chronicle, which accompanies a documentary to be broadcast on PBS in the fall, Dayton Duncan and Ken Burns capture the profound drama of the American Dust Bowl of the 1930s. Terrifying photographs of mile-high dust storms, along with firsthand accounts by more than two dozen eyewitnesses, bring to life this heart-wrenching catastrophe, when a combination of drought, wind, and poor farming practices turned millions of acres of the Great Plains into a wasteland, killing crops and livestock, threatening the lives of small children, burying homesteaders' hopes under huge dunes of dirt. Burns and Duncan collected more than 300 mesmerizing photographs, some never before published, scoured private letters, government reports, and newspaper articles, and conducted in-depth interviews to produce a document that may likely be the last recorded testimony of the generation who lived through this defining decade.
Dayton Duncan is an award-winning filmmaker and author of numerous bestsellers, including The National Parks: America's Best Idea. He lives in New Hampshire.

Ken Burns is an award-winning documentarian, whose previous projects include The Civil War and the Oscar-nominated Brooklyn Bridge. He lives in New Hampshire.
"Stormy and dark, this reads like a family scrapbook you might banish to the far corners of the attic. Who wants to remember such hard times, captured here on hardened faces and in fear-filled eyes? Why dwell on such a troublesome blip in the triumphant narrative of American manifest destiny? Fortunately, Duncan and Burns don't hesitate. Their masterful volume accompanies a November PBS documentary about the environmental catastrophe brought on by fierce drought and heedless over-cultivation in Kansas, Oklahoma, Texas, Colorado and New Mexico in the 1930s. The authors have relied on interviews with some two dozen survivors, who tell of children going to school wearing gas masks and goggles to block out the dust. Once-grassy plains became lunar landscapes, bleached and featureless. The numbers alone are stunning. In 1934, the U.S. government spent half of what it had spent throughout all of World War I just to combat the drought. Toward the end of the decade, nine million acres of land had been abandoned-an area equal to Maryland. After this year's long, dry summer, as we face the prospect of rising temperatures, this is a story full of foreboding"
-Smithsonian magazine

"This riveting, illustrated volume of vivid written and oral history extends the scope of the film...and clarifies our understanding of the 'worst manmade ecological disaster in American history.'...Burns and Duncan chronicle every harrowing phase of this 'decade of human pain and environmental degradation.' The result is a resounding chronicle of why we must preserve Earth's life-sustaining ecosystems" -
Booklist
For This Book...
Staff Pick