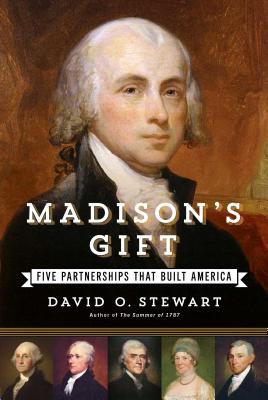 
Special Order—Subject to Availability
Historian David O. Stewart restores James Madison, sometimes overshadowed by his fellow Founders, to his proper place as the most significant framer of the new nation.

Short, plain, balding, neither soldier nor orator, low on charisma and high on intelligence, Madison cared more about achieving results than taking the credit. To reach his lifelong goal of a self-governing constitutional republic, he blended his talents with those of key partners. It was Madison who led the drive for the Constitutional Convention and pressed for an effective new government as his patron George Washington lent the effort legitimacy; Madison who wrote the Federalist Papers with Alexander Hamilton to secure the Constitution's ratification; Madison who corrected the greatest blunder of the Constitution by drafting and securing passage of the Bill of Rights with Washington's support; Madison who joined Thomas Jefferson to found the nation’s first political party and move the nation toward broad democratic principles; Madison, with James Monroe, who guided the new nation through its first war in 1812, really its Second War of Independence; and it was Madison who handed the reins of government to the last of the Founders, his old friend and sometime rival Monroe. These were the main characters in his life.

But it was his final partnership that allowed Madison to escape his natural shyness and reach the greatest heights. Dolley was the woman he married in middle age and who presided over both him and an enlivened White House. This partnership was a love story, a unique one that sustained Madison through his political rise, his presidency, and a fruitful retirement.
David O. Stewart is an award-winning author and the president of the Washington Independent Review of Books. He is the author of several acclaimed histories, including Madison’s Gift: Five Partnerships That Built America; The Summer of 1787: The Men Who Invented the Constitution; Impeached: The Trial of President Andrew Johnson and the Fight for Lincoln’s Legacy; and American Emperor: Aaron Burr’s Challenge to Jefferson’s America. Stewart’s first novel is The Lincoln Deception.
“[Stewart’s] insights are illuminating . . . He weaves vivid, sometimes poignant details throughout the grand sweep of historical events. He brings early history alive in a way that offers today's readers perspective.”
— Christian Science Monitor

“Stewart has a knack for offering telling details that humanize historical figures . . . Madison’s Gift is a fascinating look at how unfinished the nation was in the late 18th and early 19th centuries, and how one unlikely figure managed to help guide it from a precarious confederation of reluctant states to a self-governing republic that has prospered for more than two centuries.”
— Richmond Times-Dispatch

“Stewart is an acknowledged master of narrative history. He can explain a political crisis or an ideological debate with perfect clarity and exactly the sense of urgency required to capture and hold the reader’s attention.”
— The Washington Post

“A fond portrait of the mild-mannered Virginian and implacable advocate for the young American government. . . . Historian and novelist Stewart offers a pertinent lesson on Madison's ability to forge working bonds with other founding members of the new American government, even if they did not always see eye to eye. . . . Stewart's lively character sketches employ sprightly prose and impeccable research.”
— Kirkus Reviews

Stewart examines [Madison] from a fresh angle . . . [he] illuminates much about the history-making relationships among these celebrated figures that in other books might remain obscured. Readers of history are in good hands with this dependable guide, which approaches its subject with a smooth, easy going style.
— Publishers Weekly

“A sparkling, well-written work that tells a balanced story of a man who worked diligently with his contemporaries for the greater good. . . . Madison is a hero for our times, and David O. Stewart nimbly re-introduces us to him.”
— Washington Independent Review of Books

“This eminently readable work is recommended for lay readers and should be considered alongside Lynne Cheney’s James Madison.”
— Library Journal

“This is a well-done effort to provide a different perspective on Madison’s career.”
— Booklist

“It’s hard to imagine anyone saying anything new about James Madison, but David O. Stewart with his ‘five partnerships’ has done it; and he has done it in a very beautifully written book.”
— Gordon S. Wood, author of "The Idea of America: Reflections on the Birth of the United States"

“David Stewart has created a compelling and nuanced portrait of Madison that reveals him anew. Madison’s Gift is a fascinating exploration of the profound emotional bonds behind the young Republic.”
— Amanda Foreman, author of "A World on Fire"

“In this brilliantly conceived and beautifully written work, Stewart has contributed not only the best of the many recent volumes on Madison himself, but also made a signal contribution to our understanding of the founding of the Republic.”
— Ralph Ketcham, author of "James Madison: A Biography"

“James Madison was the shy, bookish, serviceable man who always managed to come out on top. David O. Stewart tracks him through the partnerships, personal and political, that defined his career, shaped a new nation—and lifted him to the White House.”
— Richard Brookhiser, author of "James Madison"