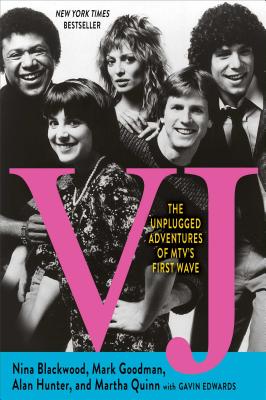 
Special Order—Subject to Availability
The original MTV VJs offer a behind-the-scenes oral history of the early years of MTV, circa 1981 to 1985, when it was exploding, reshaping the culture, and forming “the MTV generation.”

MTV’s original VJs offer a behind-the-scenes oral history of the early years of MTV, 1981 to 1987, when it was exploding, reshaping the culture, and creating “the MTV generation.”

Nina Blackwood, Mark Goodman, Alan Hunter, and Martha Quinn (along with the late J. J. Jackson) had front-row seats to a cultural revolution—and the hijinks of music stars like Adam Ant, Cyndi Lauper, Madonna, and Duran Duran. Their worlds collided, of course: John Cougar invited Nina to a late-night “party” that proved to be a seduction attempt. Mark partied with David Lee Roth, who offered him cocaine and groupies. Aretha Franklin made chili for Alan. Bob Dylan whisked Martha off to Ireland in his private jet.

But while VJ has plenty of dish—secret romances, nude photographs, incoherent celebrities—it also reveals how four VJs grew up alongside MTV’s devoted viewers and became that generation’s trusted narrators. They tell the story of the ’80s, from the neon-colored drawstring pants to the Reagan administration, and offer a deeper understanding of how MTV changed our culture. Or as the VJs put it: “We’re the reason you have no attention span.”
Nina Blackwood was one of the first MTV VJs and is a radio host on SiriusXM Satellite Radio’s Big 80s channel and host of two radio shows nationally syndicated by the United Stations Radio Networks, “Absolutely80s” and “New Wave Nation.”

Mark Goodman was one of the first MTV VJs and is a radio host on SiriusXM Satellite Radio’s Big 80s channel.

Alan Hunter was one of the first MTV VJs and is a radio host on SiriusXM Satellite Radio’s Big 80s channel.

Martha Quinn was one of the first MTV VJs and is a radio host on SiriusXM Satellite Radio’s Big 80s channel.

Gavin Edwards is the author of five books on music. A contributing editor at Rolling Stone, he has written for The New York Times Magazine, Details, and Wired.
“Nirvana for pop culture fans…a totally tubular testament to the excess of the ‘80s.”
— Associated Press

"Delicious...A slice of nostalgia from the people who were there, and wading through those pages is like going home again."
— Huffington Post

"[A] highly entertaining snapshot of a wild-frontier moment in pop culture."
— Rolling Stone

“This is an essential read for anyone who was there or for those who missed it when MTV really meant Music TeleVision. These 5 VJ's were thrown into a completely new format and made it work beyond anyone’s wildest dreams. Mine included.”
— Rick Springfield

“At last--the real inside story of the MTV explosion that rocked the world, in all its giddy excess, from the video pioneers who saw all the hair, drugs and guitars up close. VJ is the wild, hilarious, addictive tale of how one crazy moment changed pop culture forever.”
— Rob Sheffield

“In this wry, engaging oral history, the original veejays recount with bemusement—and occasional horror—their meteoric rise during MTV's heady first years. The first chapter commences with a big-haired, big-mouthed David Lee Roth— and from there the rollicking pace never lets up.”
— Jancee Dunn

“There was no such job as a 'VJ' when this unlikely crew was chosen to serve as our hosts at a revolution. Their story is a revealing inside look at the highs, lows, and hairstyles that defined a generation.”
— Alan Light

“VJ is a near textbook on ingenuity, luck, perseverance, fame, and the adjustment to life post-fame. There are also at least fifteen paragraphs that made me think, "I can't believe they're actually revealing this!"
— Richard Marx

“For latchkey kids of my generation, the original MTV VJs were the best babysitters we ever had. When our parents weren't looking, they gave us secret glimpses into a better, sexier world. They were the coolest people, on the coolest TV station, with the coolest jobs on the planet. This is their story.”
— Michael Ian Black

“MTV hit the airwaves during the golden age of album rock radio and massive rock touring, and took it all to another level. VJ is a fun and informative ride, told through the eyes of the five people who experienced the MTV phenomenon from the most intimate perspective possible.”
— Kevin Cronin

“Crazy days and nights in a different time--Nina, Mark, Alan and Martha will bring it all to life for you. This book is a joyride!”
— Jane Wiedlen