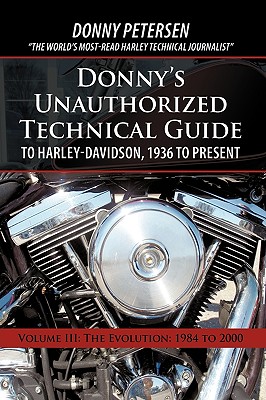 
Not On Our Shelves—Ships in 1-5 Days
(This book cannot be returned.)
Donny Petersen has been educating motorcycle enthusiasts about Harley-Davidson bikes for years. Now, he has combined all his knowledge into a twelve-volume series masterpiece and this third book is one that every rider will treasure.

Petersen, who has studied privately with Harley-Davidson engineers and has spent thirty-six years working on motorcycles, is sharing all of his secrets As the founder of Toronto's Heavy Duty Cycles in 1974, North America's premier motorcycle shop, the dean of motorcycle technology teaches about the theory, design, and mechanical aspects of Harleys. In this third volume, discover:

Petersen provides workable solutions for whatever ails the 1984 to 2000 Evolution motorcycle. Graphics, pictures, and charts guide readers on a sure-footed journey to Harley happiness. It's all from a man who has ridden hundreds of Harleys across four continents - all while doing his own roadside repairs. He shares his expert knowledge and secrets in Donny's Unauthorized Technical Guide to Harley-Davidson, 1936 to Present.
Donny Petersen operated Heavy Duty Cycles in Toronto, Canada, for thirty-six years. Since 1992, he's written a monthly column, "Techline," for American Iron Magazine. Instructed privately by Harley-Davidson engineers, he taught mechanics, designed school curricula and written exams. He enjoys riding, mountain trekking, boxing, and diving.