#SAD!: Doonesbury in the Time of Trump (Paperback) 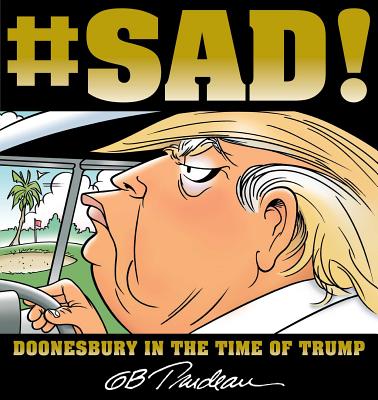 #SAD!: Doonesbury in the Time of Trump (Paperback)

From the Pulitzer Prize-winning cartoonist whose acclaimed Yuge!: 30 Years of Doonesbury on Trump blew up the bestseller list, comes the sequel millions prayed would be unnecessary. #SAD!: Doonesbury in the Time of Trump tracks the shocking victory, the inept transition, and the tumultuous eternity of POTUS’s First 500 Days.

Citizens who rise every morning in dread, braced for disruptive, Randomly Capitalized, atrociously grammarized, horrably speld, toxic tweeting from the Oval Office, can curl up at night with this clarifying collection of hot takes on the First Sociopath, his enablers, and their appalling legacy. Whether resisting or just persisting, readers will find G.B. Trudeau’s cartoons are just the thing to ease the pain of remorse (“Could I have done more to prevent this?”) and give them a shot at a few hours of unfitful sleep.

There are worse things to spend your tax cut on.

G. B. Trudeau has been drawing his Pulitzer Prize-winning comic strip for more than forty years. In addition to cartooning, Trudeau has worked in theater, film, and television. He also has been a contributing columnist for the New York Times op-ed page and later an essayist for Time magazine. He is a fellow of the American Academy of Arts & Sciences. He lives in New York City with his wife, Jane Pauley. They have three grown children.