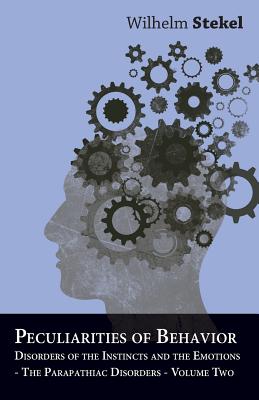 
Not On Our Shelves—Ships in 1-5 Days
(This book cannot be returned.)
This fascinating book is the second of two volumes written by Wilhelm Stekel pertaining to the peculiarities of human behaviour, with information on the impulsive acts such as kleptomania, gambling, pyromania, and other allied impulses. Stekel was a pioneer of the study of human instinct and emotions, which are examined here for the first time in the light of their developmental history. This fascinating and accessible text provides far-reaching investigations into the depths of the human soul, perfect for the student of psychology interested in the intricacies of impulsive behaviour. Chapters contained herein include: Instinct, Affect and Impulse; The Impulse to Wander; Flight into Parapathiac Delirium; Narcotomania (Drug Addiction); Stealing; and The Sexual Roots of Kleptomania. Wilhelm Stekel (1868 - 1940) was an Austrian psychologist and physician. He was an early follower of the seminal Sigmund Freud, often described as Freud's most distinguished pupil and commonly hailed as one of the founding fathers of modern psychoanalytical methodology. Many vintage texts such as this are increasingly scarce and expensive, and it is with this in mind that we are republishing this volume now in an affordable, modern, high-quality edition. It comes complete with a specially commissioned new biography of the author.