All This and Heaven Too: Heaven; The First Part Last; Sweet, Hereafter (Paperback) 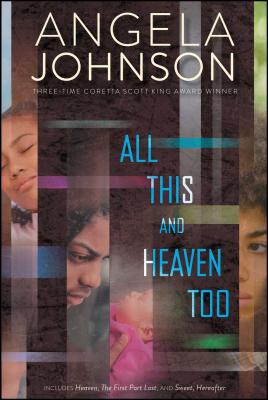 All This and Heaven Too: Heaven; The First Part Last; Sweet, Hereafter (Paperback)

In Heaven, Marley has always relied on her parents, until a lie she’s been told all her life threatens to break apart her family.

In The First Part Last, Bobby is sixteen. He’s not ready to be a father, but when his girlfriend finds out she’s pregnant, he has to learn what it really means to be a man.

And in Sweet, Hereafter, Shoogy isolates herself from the people who love her. Finding Curtis changes all that, but when he’s called back to Iraq, she might lose him forever.

These compelling portrayals, from Printz winner and three-time Coretta Scott King Award-winner Angela Johnson, depict the realities, both bittersweet and inspirational, of growing up.
Angela Johnson has won three Coretta Scott King Awards, one each for her novels The First Part Last, Heaven, and Toning the Sweep. The First Part Last was also the recipient of the Michael L. Printz Award. She is also the author of the novels Looking for Red and A Certain October. Her books for younger readers include the Coretta Scott King Honor Book When I Am Old with You, illustrated by David Soman; Wind Flyers and I Dream of Trains, both illustrated by Loren Long; and Lottie Paris Lives Here and its sequel Lottie Paris and the Best Place, both illustrated by Scott M. Fischer. Additional picture books include A Sweet Smell of Roses, Just Like Josh Gibson, The Day Ray Got Away, and All Different Now. In recognition of her outstanding talent, Angela was named a 2003 MacArthur Fellow. She lives in Kent, Ohio. Visit her at AJohnsonAuthor.com.
*“Clear evidence that love, more than blood, makes family.”
— Kirkus Reviews, starred review

*“Readers will only clamor for more.”
— Publishers Weekly, starred review

*“Johnson’s evocative yet starkly simple language powerfully shows the devastating effects of the war on one small community…the characters and circumstances are never anything less than rich and real.”
— Kirkus Reviews, starred review on Sweet, Hereafter (A Kirkus Best Book of 2010)