Blood Ninja III: The Betrayal of the Living (Paperback) 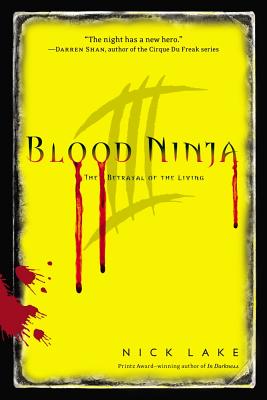 Blood Ninja III: The Betrayal of the Living (Paperback)


Not On Our Shelves—Ships in 1-5 Days
The fate of feudal Japan hangs in the balance in this bloody conclusion to the epic Blood Ninja trilogy.

Taro is at a crossroads: He has vanquished Lord Oda for good, but with no land and no title, he has no hope of marrying Hana, the daughter of a daimyo. So when Taro receives news of a murderous dragon and the large reward for killing it, he and his friends find themselves on a dangerous quest to slay the beast.

Their mission has the potential to save the people of Japan—but failure will result in the deaths of thousands. And dragons are not the only monsters they will encounter: The dead, led by the odious Kenji Kira, have begun to rise, and they have Taro in their sights.

In this heart-stopping conclusion to the Blood Ninja trilogy, the future of all feudal Japan is in danger, and everything Taro holds dear will be threatened. But it is the betrayal of flesh and blood—his own flesh and blood—that may be his ultimate undoing.
Nick Lake is a children’s book editor at Harper UK. He received his degree in English from Oxford University. His Blood Ninja trilogy was inspired by his interest in the Far East, and by the fact that he is secretly a vampire ninja himself. Nick lives with his wife and daughter in England. Visit him on Twitter @NickLakeAuthor.
“The night has a new hero.”
— Darren Shan, author of the Cirque Du Freak series

“A fast-paced, gripping book about ninjas. It’s all I ask for, really.”—Conn Iggulden, coauthor of The Dangerous Book for Boys

“Deftly blends sixteenth-century Japanese samurai history with vampire mythology to concoct a gory and fast-paced adventure that will grab readers...the cliff-hanger ending will leave readers clamoring for a sequel.”—Booklist

“Lake uses the story's familiar elements skillfully, combining them into an imaginative and original whole. And, really, with vampire ninjas, how can you lose?”—Publishers Weekly

“Those who enjoy Far Eastern-tinged quest stories—with a dash of vampires and ninjas for flavor—will find much to enjoy here.”—VOYA

"Fans of Blood Ninja (2009) no doubt loved the plentiful gore, swordplay, light romance, and the premise
that all ninjas are vampires. This sequel . . . adds even more twists, turns, and travels."
--BOOKLIST, December 15, 2010