Sophia's War: A Tale of the Revolution (Paperback) 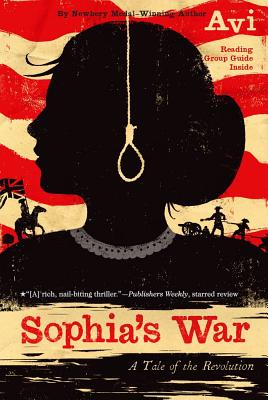 Sophia's War: A Tale of the Revolution (Paperback)


In Stock—Click for Locations
Lives hang in the balance in this gripping Revolutionary War adventure from a beloved Newbery Medalist.

In 1776, young Sophia Calderwood witnesses the execution of Nathan Hale in New York City, which is newly occupied by the British army. Sophia is horrified by the event and resolves to do all she can to help the American cause. Recruited as a spy, she becomes a maid in the home of General Clinton, the supreme commander of the British forces in America. Through her work she becomes aware that someone in the American army might be switching sides, and she uncovers a plot that will grievously damage the Americans if it succeeds. But the identity of the would-be traitor is so shocking that no one believes her, and so Sophia decides to stop the treacherous plot herself, at great personal peril: She’s young, she’s a girl, and she’s running out of time. And if she fails, she’s facing an execution of her own.

Master storyteller Avi shows exactly how personal politics can be in this “nail-biting thriller” (Publishers Weekly) that is rich in historical detail and rife with action.
Avi is the author of more than seventy books for children and young adults, including the 2003 Newbery medal winner Crispin: The Cross of Lead. He has won two Newbery Honors and many other awards for his fiction. He lives with his family in Denver, Colorado. Visit him at Avi-Writer.com.
* “The book’s riveting opening scene, in which Sophie watches as Nathan Hale is hanged as a spy, foreshadows the danger she knowingly accepts by engaging in espionage. Few historical novels are as closely shaped by actual events as this one during the last 100 pages. Working within the bounds of credibility, Avi manages to keep the fictional narrator on the scene for a good deal of the action and uses real moments to bring the imagined story to its dramatic heights. A glossary of eighteenth-century terms and an author’s note are appended. Pair this intriguing historical novel with Sheinkin’s The Notorious Benedict Arnold (2010).”

* “Newbery Medalist Avi (Crispin: The Cross of Lead) channels the mood, language, and danger of the Revolutionary War in this seamless blend of history and fiction, set in British-occupied New York City…. The book is chockful of fascinating historical details, including the conditions for those stranded in New York and the failed meetings between Arnold and John André, his (real-life) British contact. Avi doesn’t sugarcoat the brutal realities of war…in this rich, nail-biting thriller.”

"Avi's setting is impeccable (especially the descriptions of the prisons where rebel soldiers were kept); the intrigue on the home front, real; and the tension of living in enemy territory, intense."
— Horn Book Magazine, November/December 2012

"Newbery Honor-winning author Avi offers a gripping view of the Revolutionary War through the eyes of a 12-year-old spy.... With language drawn from the period (and appended in a glossary) and historical events forming the tight framework of the tense, imagined drama, Avi offers an action-filled novel with wide classroom appeal."
— Book Links, January 2013