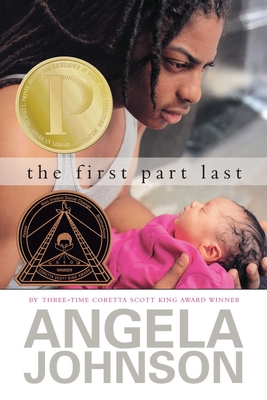 
Not On Our Shelves—Ships in 1-5 Days
This little thing with the perfect face and hands doing nothing but counting on me. And me wanting nothing else but to run crying into my own mom's room and have her do the whole thing.
It's not going to happen....
Bobby is your classic urban teenaged boy -- impulsive, eager, restless. On his sixteenth birthday he gets some news from his girlfriend, Nia, that changes his life forever. She's pregnant. Bobby's going to be a father. Suddenly things like school and house parties and hanging with friends no longer seem important as they're replaced by visits to Nia's obstetrician and a social worker who says that the only way for Nia and Bobby to lead a normal life is to put their baby up for adoption.
With powerful language and keen insight, Johnson looks at the male side of teen pregnancy as she delves into one young man's struggle to figure out what "the right thing" is and then to do it. No matter what the cost.
Angela Johnson has won three Coretta Scott King Awards, one each for her novels The First Part Last, Heaven, and Toning the Sweep. The First Part Last was also the recipient of the Michael L. Printz Award. She is also the author of the novels Looking for Red and A Certain October. Her books for younger readers include the Coretta Scott King Honor Book When I Am Old with You, illustrated by David Soman; Wind Flyers and I Dream of Trains, both illustrated by Loren Long; and Lottie Paris Lives Here and its sequel Lottie Paris and the Best Place, both illustrated by Scott M. Fischer. Additional picture books include A Sweet Smell of Roses, Just Like Josh Gibson, The Day Ray Got Away, and All Different Now. In recognition of her outstanding talent, Angela was named a 2003 MacArthur Fellow. She lives in Kent, Ohio. Visit her at AJohnsonAuthor.com.


Publishers Weekly, starred review Readers will only clamor for more.