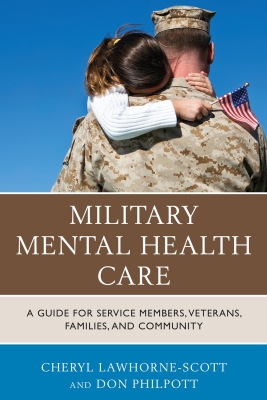 
Not On Our Shelves—Ships in 1-5 Days
Too often American veterans return from combat and spiral into depression, anger and loneliness they can neither share nor tackle on their own. Military Mental Health Care: A Guide for Service Members, Veterans, Families, and Community seeks to aid our troubled, returning forces by dissecting the numerous mental health problems they face upon arriving stateside. Don Philpott and Cheryl Lawhorne-Scott, co-authors with Janelle Hill of the highly successful Wounded Warrior Handbook, detail not only each issue's symptoms, but also discuss what treatments are available, and the best ways for veterans to access those treatments while readjusting to civilian life. In addition, they connect and explain many alarming trends, such as joblessness, poverty and addiction, appearing in our nation's veteran population on a broader scale. PTSD and struggles with anxiety affect far more than veterans themselves, as sobering phenomena like homelessness, suicide, domestic violence and divorce too often become realities for those returning from war. Military Mental Health Care is both a resource for struggling veterans and a useful tool for their loved ones, or anyone looking for ways to support the veterans in their lives.
Cheryl Lawhorne-Scott is a clinical therapist with an eighteen-year track record of counseling services specializing in trauma care, posttraumatic stress, and traumatic brain-injury treatment for wounded, ill, and injured service members and their families. As a senior consultant, under the Office of the Secretary of Defense, she is part of a team that seeks innovative and proactive ways to enhance resources and services to military members and their families. She recently participated in the corporate mission, vision, and implementation of projects for the Department of Defense to align current and future strategic plans and objectives. She possesses proven expertise in both program management and clinical experts in research, business development, and wounded care. Proud spouse and teammate to Lt. Col. Jeff Scott, and mom to Evan and Quinn.. Don Philpott is editor of International Homeland Security Journal and has been writing, reporting, and broadcasting on international events, trouble spots, and major news stories for almost forty years. For twenty years he was a senior correspondent with Press Association-Reuters, the wire service, and traveled the world on assignments including Northern Ireland, Lebanon, Israel, South Africa, and Asia. He writes for magazines and newspapers in the United States and Europe and is a regular contributor to radio and television programs on security and other issues. He is the author of more than 120 books on a wide range of subjects and has had more than five thousand articles printed in publications around the world. His recent books include the Military Life series, Terror--Is America Safe?, Workplace Violence Prevention, and the Education Facility Security Handbook.