A Walking Tour of the Georgetown Set (Paperback) 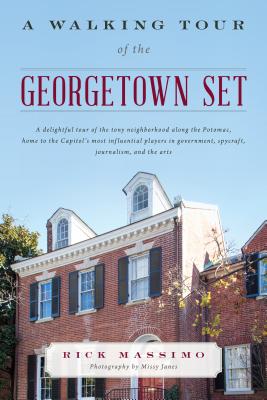 A Walking Tour of the Georgetown Set (Paperback)


In Stock—Click for Locations
The tony, leafy neighborhood of Georgetown along the Potomac river in Washington, D.C. has been influential in American history since the 18th century when it was a thriving seaport. But during the Cold War, following World War II and up until the end of the 20th century, it was home to the Capitol's most influential players in government, spycraft, journalism, and the arts. Within less than a square mile were located the red brick Federal era homes of the best and the brightest, most of them close friends and frequent dinner companions. They came to be known as the Georgetown Set, despised by Richard Nixon for their Ivy League, patrician clannishness, their secret old boy arrogance, and their unfettered access to the highest levels of power in the city. The inner circle included Phillip and Katharine Graham, owners of the Washington Post; the columnists Joe and Stewart Alsop; The Bundy brothers; powerbroker and railroad scion Averrill Harriman; Secretary of State John Foster Dulles; Jack and Jackie Kennedy; and many more spooks, G men, Senators, and Supreme Court Justices were members of this elite club. Now, for the first time, author Richard Massimo takes us on a walking tour of the neighborhood where the Georgetown Set lived, including a map, recent photos of each house, and sketches of each inhabitant. Spend an afternoon walking the brick sidewalks of Georgetown and you'll see where these historic figures resided. "The hand that mixes the Georgetown martini is time and again the hand that guides the destiny of the Western world." -Henry Kissinger.
Rick Massimo is a writer and editor at WTOP who previously spent nine years reporting for Providence Journal where he won awards for his arts criticism and diversity in media writing. He is also the author of I Got a Song: A History of the Newport Folk Festival. He lives in Washington, DC.