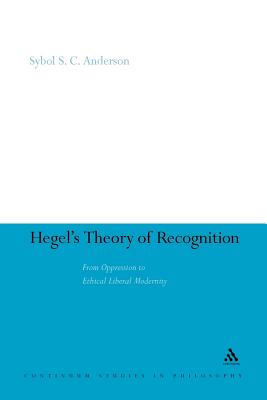 This is book number 52 in the Continuum Studies in Philosophy series.

Since the 1960s 'New Left' emancipatory movements have claimed that women, ethnic minorities, gays and lesbians, and other groups are oppressed. Some liberal theorists have treated their demands for equality as matters of toleration, of securing by law the equal treatment of cultures and conceptions of the good. However, much more is involved. Also at stake are conceptions of identity differences that inform social practices and perpetuate inequalities that are beyond the reach of legislation. This book outlines an alternative approach to a liberal politics of difference. Sybol Anderson begins by constructing a definition of oppression that illuminates, from a liberal perspective, its salient features. Exposing the limits of toleration as a response, Anderson reaches beyond it for a viable concept of recognition. Hegel's theory of recognition proves an indispensable resource in this endeavor. Anderson concludes, contrary to recent critics of Hegelian recognition, that Hegel's theory can successfully guide modern liberal states toward the achievement of social equality.
Sybol Anderson is Assistant Professor of Philosophy at St. Mary's College of Maryland, USA.