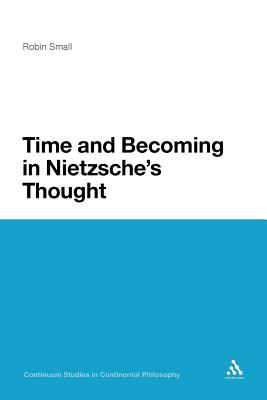 Puzzles about time - about past, present and future, and the nature of becoming - have concerned philosophers from the ancient Greeks to the present day. Yet few have been as radical in their thinking as Friedrich Nietzsche. Time and Becoming in Nietzsche's Thought explores Nietzsche's approach to temporality, showing that his metaphorical and literary presentations lend themselves, in surprising detail, to the debates that have engaged other thinkers.

Like Heraclitus, Nietzsche is a philosopher of becoming who sees reality as a continual flow of change. Time is an interpretation of becoming, designed to enable its tensions and fluctuations to be grasped conceptually by our minds. From this starting point, Robin Small explores the emergence of sharply contrasting models of temporality which express differing forms of life. The book concludes with a return to Nietzsche's Dionysian vision of playful participation in becoming as a never-ending creation and destruction. Time and Becoming in Nietzsche's Thought reveals Nietzsche as a major contributor to our thinking about temporality and its significance for human life.