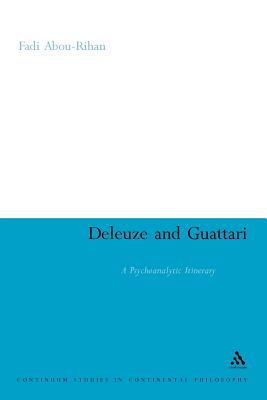 
Not On Our Shelves—Ships in 1-5 Days
(This book cannot be returned.)
Most commentators judge Deleuze and Guattari's Anti-Oedipus as either a Medusa into whose face psychoanalysis cannot but stare and suffer the most abominable of deaths or a well-intentioned but thoroughly misguided flash in the pan. Fadi Abou-Rihan shows that, as much as it is an insightful critique of the assimilationist vein in psychoanalysis, Anti-Oedipus remains fully committed to Freud's most singular discovery of an unconscious that is procedural and dynamic. Moreover, Abou-Rihan argues, the anti-oedipal project is a practice where the science of the unconscious is made to obey the laws it attributes to its object. The outcome is nothing short of the "becoming-unconscious" of psychoanalysis, a becoming that signals neither the repression nor the death of the practice but the transformation of its principles and procedures into those of its object. Abou-Rihan tracks this becoming alongside Nietzsche, Winnicott, Feynman, Bardi, and Cixous in order to reconfigure desire beyond the categories of subject, lack, and tragedy. Firmly grounded in continental philosophy and psychoanalytic practice, this book extends the anti-oedipal view on the unconscious in a wholly new direction.
Fadi Abou-Rihan is in private practice in psychoanalysis and psychotherapy. He lives, works, and writes in Toronto, Canada.