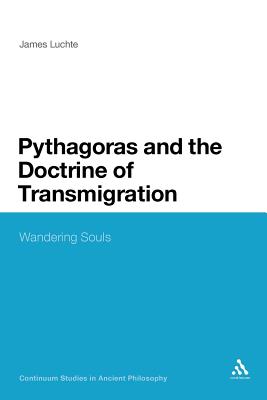 This is book number 14 in the Continuum Studies in Ancient Philosophy series.

The mythical narrative of transmigration tells the story of myriad wandering souls, each migrating from body to body along a path of recurrence amid the becoming of the All. In this highly original study, James Luchte explores the ways in which the concept of transmigration is a central motif in Pythagoras' philosophy, representing its fundamental meaning. Luchte argues that the many strands of the tale of transmigration come together in the Pythagorean philosophical movement, revealing a unity in which, for Pythagoreans, existence and eschatology are separated only by forgetfulness. Such an interpretation that seeks to retrieve the unity of Pythagorean thought goes against the grain of a long-standing tradition of interpretation that projects upon Pythagoras the segregation of 'mysticism' and 'science'. Luchte lays out an alternative interpretation of Pythagorean philosophy as magical in the sense that it orchestrates a holistic harmonization of theoria and praxis and through this reading discloses the radical character of Pythagorean philosophy.
James Luchte is Lecturer of Philosophy and Programme Co-ordinator of the MA in European Philosophy at the University of Wales, Trinity St. David, in Wales. His other publications include The Peacock and the Buffalo: The Poetry of Nietzsche (translator), Pythagoras and the Doctrine of Transmigration, Heidegger's Early Philosophy: The Phenomenology of Ecstatic Temporality, Nietzsche's Thus Spoke Zarathustra: Before Sunrise (editor) and Kant's Critique of Pure Reason: A Reader's Guide (all Continuum). He has also published numerous articles on various topics in European Philosophy.