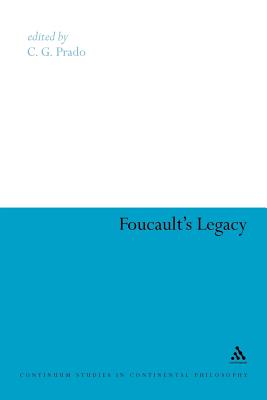 This is book number 76 in the Continuum Studies in Continental Philosophy series.

Foucault's Legacy brings together the work of eight Foucault specialists in an important collection of essays marking the 25th anniversary of Foucault's death. Focusing on the importance of Foucault's most central ideas for present-day philosophy, the book shows how his influence goes beyond his own canonical tradition and linguistic milieu. The essays in this book explore key areas of Foucault's thought by comparing aspects of his work with the thought of a number of major philosophers, including Nietzsche, Heidegger, Rorty, Hegel, Searle, Vattimo and Williams. Crucially the book also considers the applicability of his central ideas to broader issues such as totalitarianism, religion, and self-sacrifice. Presenting a fresh and exciting vision of Foucault as a philosopher of enduring influence, the book shows how important Foucault remains to philosophy today.
C.G. Prado is Professor Emeritus of Philosophy at Queen's University, Canada. His previous publications include Starting with Foucault (Westview, 2000), A House Divided: Comparing Analytic and Continental Philosophy (Humanity, 2003), Searle and Foucault on Truth (Cambridge, 2006) and Choosing to Die: Elective Death and Multiculturalism (Cambridge, 2008).