Outbreak!: 50 Tales of Epidemics that Terrorized the World (Paperback) 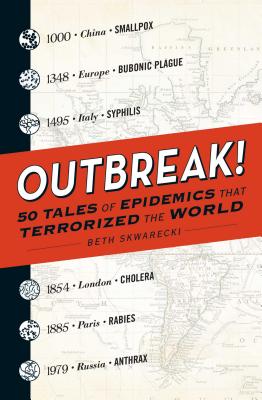 Outbreak!: 50 Tales of Epidemics that Terrorized the World (Paperback)


Not On Our Shelves—Ships in 1-5 Days
From ancient scourges to modern-day pandemics!

Throughout history--even recent history--highly contagious, deadly, and truly horrible epidemics have swept through cities, countrysides, and even entire countries. Outbreak! catalogs fifty of those incidents in gruesome detail, including:From ancient outbreaks of smallpox and plague to modern epidemics such as SARS and Ebola, the stories capture the mystery and devastation brought on by these diseases. It's a sickeningly fun read that confirms the true definition of going viral.
Beth Skwarecki is the health editor at LifeHacker.com. She also runs their health vertical, Vitals. She has previously worked as a freelance health and science writer and her work has been featured on Medscape, Performance Menu, Public Health Perspectives, Bitch magazine, the Pittsburgh Post-Gazette, Science, and Scientific American. She is the author of Outbreak! 50 Tales of Epidemics that Terrorized the World and Genetics 101.
"Let's be honest: epidemics are terrifying. In Outbreak! Beth Skwarecki surveys some of the most important historically. Skwarecki does not skimp on the details and therein is real life horror." --Cool Hunting