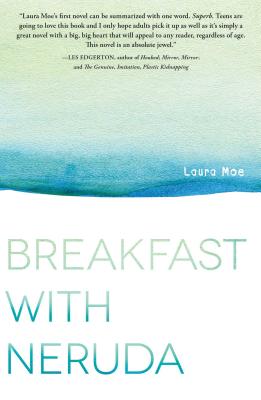 
Special Order—Subject to Availability
Michael Flynn is just trying to get through his community service after he made the dumb decision to try to blow up his friend's car with fireworks--the same friend who stole Michael's girl. Being expelled and losing his best buddy and his girlfriend are the least of his problems: Michael has learned to hide everything, from his sick hoarder mother to the fact that he's stuck living in a 1982 Ford LTD station wagon he calls the Blue Whale. Then one day, during mandatory community service, he meets Shelly, a girl with a past, who's also special enough to unmask Michael's deepest secrets. Can he manage to be worthy of her love, a guy living in a car, unable to return to his chaotic and fit-to-be-condemned home? Shelly won't give up, and tries to peel back the layers of garbage and pain to reveal Michael's immense heart.
Laura Moe is the author of Breakfast with Neruda, a Simon & Schuster book.
"This debut is...flecked with an endearing blend of idealism, empathy, and quirk..." --Booklist

"Moe uses lyrical language to introduce teenagers whose problems go beyond bullying or unrequited love. She treats Michael's unusual home situation with realistic grace, while the relationship between the two teenagers is organic and interesting. A summer long punishment becomes a sensitive, thoughtful novel." --Kirkus Reviews

"It's about love and understanding and betrayal and pain. All the necessary ingredients to make a connection to the reader." --Teen Librarian Toolbox

"There is a beautiful relationship between two teens who connect over poems of Neruda...and their ever-witty banter." --Voya Magazine

"Those who choose to read it will not regret it. It addresses some interesting topics (hoarding, missing father, community service, car bombs), and the not-so-average love story is refreshing. A good, quick read to take readers away from the usual dystopia and back into the real world." --Voya Magazine