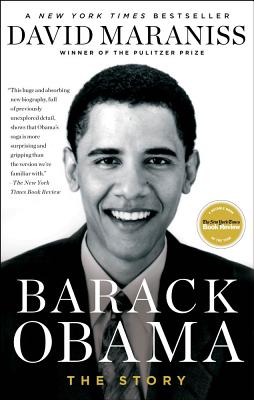 
Special Order—Subject to Availability
The groundbreaking multigenerational biography, a richly textured account of President Obama and the forces that shaped him and sustain him, from Pulitzer Prize–winning reporter, political commentator, and acclaimed biographer David Maraniss.

In Barack Obama: The Story, David Maraniss has written a deeply reported generational biography teeming with fresh insights and revealing information, a masterly narrative drawn from hundreds of interviews, including with President Obama in the Oval Office, and a trove of letters, journals, diaries, and other documents.

The book unfolds in the small towns of Kansas and the remote villages of western Kenya, following the personal struggles of Obama’s white and black ancestors through the swirl of the twentieth century. It is a roots story on a global scale, a saga of constant movement, frustration and accomplishment, strong women and weak men, hopes lost and deferred, people leaving and being left. Disparate family threads converge in the climactic chapters as Obama reaches adulthood and travels from Honolulu to Los Angeles to New York to Chicago, trying to make sense of his past, establish his own identity, and prepare for his political future.

Barack Obama: The Story chronicles as never before the forces that shaped the first black president of the United States and explains why he thinks and acts as he does. Much like the author’s classic study of Bill Clinton, First in His Class, this promises to become a seminal book that will redefine a president.
David Maraniss is an associate editor at The Washington Post and a distinguished visiting professor at Vanderbilt University. He has won two Pulitzer Prizes for journalism and was a finalist three other times. Among his bestselling books are biographies of Bill Clinton, Barack Obama, Roberto Clemente, and Vince Lombardi, and a trilogy about the 1960s—Rome 1960; Once in a Great City (winner of the RFK Book Prize); and They Marched into Sunlight (winner of the J. Anthony Lucas Prize and Pulitzer Finalist in History).
“This is a revelatory book . . . which will certainly shape our understanding of President Obama’s strengths, weaknesses and inscrutabilities. Every few pages Maraniss offers a factual nugget that changes or enlarges the prevailing lore.”
— The New York Times

“[This] book is full of riveting stories, shrewd observations, and fascinating details.”
— The New Yorker

“Barack Obama is biography at its best. A prodigiously researched and exquisitely written multigenerational account…. With subtlety and sophistication, Maraniss captures and conveys Obama's sensibilities and sensitivities.”
— San Francisco Chronicle

“Remarkable . . . Maraniss captures Obama’s search for purpose and the kindling of his ambition with an intimacy unlike that of other biographers—including Obama….[The book] offers the rawest account of his early life and a deeper understanding of his origins. Three and a half years and countless publications after Obama’s Inauguration, that is a remarkable feat.”
— Time

“There's far more to this revealing and deeply reported coming-of-age story, a term usually applied to novels….[It] reads like a novel filled with stories too unlikely for fiction . . . which makes it the best kind of political biography.”
— USA Today

“Impeccably researched…. Stunning in its detail… Maraniss… gets out of the way and lets his first-rate reporting tell the story. . . . It is like watching a magician at work”
— Milwaukee Journal Sentinal
For This Book...
Staff Pick