Breakfast with Socrates: An Extraordinary (Philosophical) Journey Through Your Ordinary Day (Paperback) 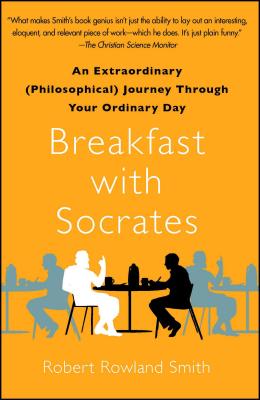 Breakfast with Socrates: An Extraordinary (Philosophical) Journey Through Your Ordinary Day (Paperback)


Not On Our Shelves—Ships in 1-5 Days
What is the philosophy of sweat? Reality TV? Domestic warfare? Making up and having sex? Take a sparkling ride through an ordinary day with hilarious philosophical gadfly Robert Rowland Smith in Breakfast with Socrates.

Ever want to have a bagel with Hegel? Eggs with Bacon? Or spend a day with Socrates, Mill, Herodotus, or Kant, able to pick their brains about the most mundane moments of your life? Former Oxford Philosophy Fellow Robert Rowland Smith thought he would, and so with dry wit and marvelous invention, Smith whisks you through a typical day, injecting a little philosophy into it at every turn. Wake up with Descartes, go to work with Plato and Nietzsche, visit the gym with Kant, have sex with Ovid (or Simone de Beauvoir).

As the day unfolds, Smith grounds complex, abstract ideas in concrete experience, giving you an informal introduction to applying philosophy to everyday life. Not only does Breakfast with Socrates cover the basic arguments of philosophy, it brings an irresistible, insouciant charm to its big questions, waking us up to the richest possible range of ideas on how to live. Neither breakfast, lunch, nor dinner will ever be the same again.
Robert spent the first part of his career as a Prize Fellow of All Souls College, Oxford, and the second as a partner in a leading firm of management consultants.He has written for The Independent, been profiled in The Sunday Telegraph Magazine, contributed to books on philosophy for children, and broadcast for BBC Radio. Robert now divides his time between consulting, writing, and giving talks about the philosophy of life. He lives in London with his wife and has three daughters.

"What makes Smith’s book genius isn’t just the ability to lay out an interesting, eloquent, and relevant piece of work – which he does. The kicker for “Breakfast with Socrates” is that it’s just plain funny."

"Robert Rowland Smith takes the reader into a worm hole of psychology, sociology and theology to show us the hidden meanings in our daily lives. A thoughtful and continuously entertaining picture of human behavior. A filling mental meal that should leave you delightfully satisfied."

"The author is genuinely good at making connections between important ideas and lived experience, and successful in showing that philosophy can be a vehicle for making the trivialities of life more meaningful (and hence more bearable) than they otherwise might be."

"Philosophy made accessible and applied to the quotidian...manages to be funny without underestimating the reader."

"This charming book wears its erudition with ease and suggests that despite what Socrates says, it is in fact the unexamined day that is not worth living."

"Rowland Smith supposes his reader is his social and intellectual equal who just happens not to have studied the discipline he did. Taking an aspect of daily life in each chapter - getting out of bed, going to work - he explains key concepts in a way that is amusing and enlightening. He doesn't apply the concepts for his readers but allows them to draw their own conclusions."

"...a very knowledgeable and affable guide."

"I am often asked to recommend a good introduction to philosophy - now I've discovered one. There are plenty of books but mostly they're either the 'wrong kind' of philosophy or they are terribly written. Smith's work is witty, inventive and intelligent - Carl Schmitt on arguing with your partner, Jacques Derrida on booking a holiday - and brilliantly shows how grounded High Theory really is."

"Smith does not argue for one idea over another but applies the theories in an interesting and sometimes lighthearted manner...The author's accessible writing style and presentation will make this book appealing to readers with a general interest in philosophy or those looking to add some humor and meaning to the ordinary events in their lives."