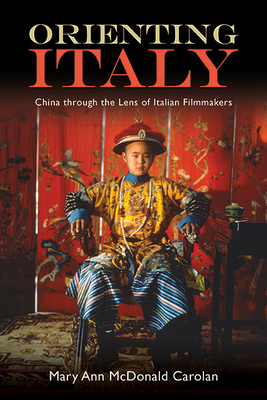 
Not On Our Shelves—Ships in 1-5 Days
(This book cannot be returned.)
Orienting Italy explores contemporary Italian filmmakers' fascination with China and the Chinese in both documentary and fictional films. Delineating the contours of this fascination, the book begins with the works of Carlo Lizzani (Behind the Great Wall, 1958) and Michelangelo Antonioni (Chung Kuo--China, 1972), both of whom ventured to China with the aim of documenting new, yet physically and culturally distant, realities. Their documentary investigations yielded to fictional portrayals, from the lavish view of a historical Middle Kingdom by director Bernardo Bertolucci (The Last Emperor, 1987) to the stark consideration of Italian economic exchange with contemporary China by Gianni Amelio (The Missing Star, 2006). The wave of Chinese migration to Italy in the late twentieth century created a new sense of otherness within Italy as Chinese migrants became the subjects of fictional narratives and documentaries in the works of Stefano Incerti (Gorbaciof, 2010) and Andrea Segre (Shun Li and the Poet, 2011) and Riccardo Cremona and Vincenzo De Cecco (Miss Little China, 2009). In the twenty-first century, a new chapter in the relationship between Italy and China has emerged in the form of transnational collaborations in the art and business of filmmaking.
Mary Ann McDonald Carolan is Professor of Italian and Director of the Italian Studies program at Fairfield University. She is the author of The Transatlantic Gaze: Italian Cinema, American Film, also published by SUNY Press.