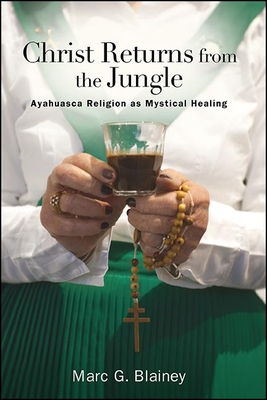 
Not On Our Shelves—Ships in 1-5 Days
(This book cannot be returned.)
After more than 450 years of European intrusions into South America's rainforest, small groups of people across Europe now gather discreetly to participate in Amazonian ceremonies their local governments consider a criminal act. As devotees of a new Brazil-based religion called Santo Daime, they claim that they contact God by way of ayahuasca, a potent psychoactive beverage first developed by native communities in pre-Columbian Amazonia. This bitter, brown liquid is a synergy of plants containing DMT, a mind-altering chemical classified as an illicit hallucinogen in most countries. By contrast, Santo Daime members (daimistas) revere ayahuasca as a sacrament, combining it with rituals and theologies borrowed from Christian mysticism, indigenous shamanism, Afro-Brazilian spiritualism, and Western esotericism.

The Santo Daime religion was founded in 1930 by an Afro-Brazilian rubber tapper named Raimundo Irineu Serra, now known as Mestre (Master) Irineu. Presenting results from more than a year of fieldwork with Santo Daime groups in Europe, Marc G. Blainey contributes new understandings of contemporary Westerners' search for existential well-being on an increasingly interconnected planet. As a thorough exploration of daimistas' beliefs about the therapeutic potentials of ayahuasca, this book takes readers on an ethnographic journey into the deepest recesses of the human psyche.
Marc G. Blainey is an adjunct faculty member in Spiritual Care and Psychotherapy at Martin Luther University College in Waterloo, Ontario. He received his PhD in anthropology from Tulane University and is the coeditor (with Emiliano Gallaga) of Manufactured Light: Mirrors in the Mesoamerican Realm.