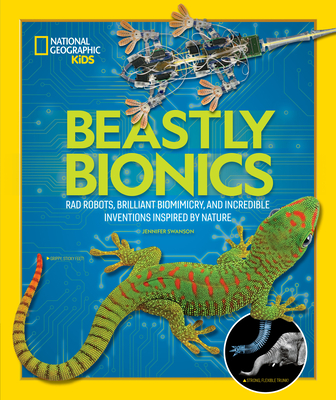 
Not On Our Shelves—Ships in 1-5 Days
Discover how the natural world inspires innovation in science and technology to create the latest and greatest breakthroughs and discoveries in this exciting book.Did you know that scientists have developed a bionic tool shaped like an elephant's trunk that helps lift heavy objects? Or that the needle-like pointed beak of the kingfisher bird encouraged engineers in Japan to change the design of the Shinkansen "bullet trains" to reduce noise? Across multiple fields of study and methods of problem-solving, scientists are turning to biomimicry, or engineering inspired by biology or nature, to make all kinds of cool technological advancements. From robots that protect people and gather information to everyday inventions, like reflectors on the roads and ice-proof coatings for airplanes, to new sources of renewable energy, this book dives into the ways that nature can give us ideas on how to improve our world. Discover more than 40 examples of technology influenced by animals, learn about some of the incredible creatures who have inspired multiple creations, and meet some of the scientists and the stories behind their inventions.
JENNIFER SWANSON is the award-winning author of more than 35 nonfiction and fiction books for children. Her books in the How Things Work series by The Child's World were named to Booklist's 2012 Top 10 Books for Youth. Top reviews include a starred review in Booklist and recommended reviews from School Librarians Workshop, Library Media Connection, and a Nerdy Book Club award. Swanson's passion for science resonates in all her books but especially in Brain Games (National Geographic Kids), which received a Eureka! Honor Award from the California Reading Association, and Super Gear: Nanotechnology and Sports Team Up (Charlesbridge), which was named both a Best STEM book of 2017 and an Outstanding Trade Book 2017 by the National Science Teacher Association.