America the Beautiful: A Story in Photographs (Hardcover) 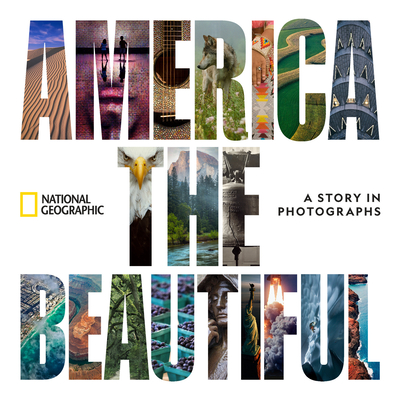 America the Beautiful: A Story in Photographs (Hardcover)


In Stock—Click for Locations
America the Beautiful showcases the stunning spaces closest to our nation's heart--from the woods in the Great Appalachian Valley that Davy Crockett once called home to the breathtaking sweep of California's Big Sur coast to the wilds of Alaska. It also celebrates the people who have made this country what it is, featuring a wide range of images including the Arikara Nation in the early 1900s and scientists preparing for travel to Mars on a Hawaiian island. Culled from National Geographic's vaunted photo archives, spanning a period of more than 130 years, this provocative collection depicts the splendor of this great nation as only National Geographic can, with a dramatic combination of modern and historical imagery--from the creation of architectural icons like the Golden Gate Bridge and Lady Liberty to the last of the country's wild places preserved in our national parks.
With a structure inspired by the original song "America the Beautiful," this book recognizes what makes our nation great, region by region. And all 50 states and six territories of the U.S. are honored with 50 words from celebrities, historians, activists, conservationists, and politicians who call America home. Profound and inspiring, this is a book for everyone who has ever marveled at the beauty of the United States.
One of the world's leading nonfiction publishers, NATIONAL GEOGRAPHIC has published more than 1,700 titles, featuring such categories as history, travel, nature, photography, space, science, health, biography, and memoir. A portion of its proceeds is used to fund exploration, conservation, and education through ongoing contributions to the work of the National Geographic Society.
JILL LEPORE (foreword) is the David Woods Kemper ’41 Professor of American History at Harvard University. She has been writing for The New Yorker since 2005 and is also the host of the podcast The Last Archive. As a wide-ranging and prolific essayist, Lepore writes about American history, law, literature, and politics. She won the Bancroft Prize for her book The Name of War and was a Pulitzer Prize finalist in history for The Story of America, which was also short-listed for the PEN Literary Award for the Art of the Essay. Her other award-winning books include Book of Ages, The Secret History of Wonder Woman, and These Truths: A History of the United States. Her book If Then: How the Simulmatics Corporation Invented the Future, is out this year.
"These aren't just beautiful images; they're momentary encapsulations of people, wildlife, environment, and emotion at their essence."—Booklist

"This generous collection of more than 250 National Geographic Society photographs, inspired, as Jill Lepore notes in the foreword, by the poem 'America the Beautiful,' captures the splendor of all 50 states as well as six U.S. territories. The images are organized into four regions: 'The West Pacific,' where snow-covered trees stand in Yellowstone National Park and the Golden Gate Bridge in California is shown at sunset; 'The East Mid-Atlantic,' where the Chrysler Building looms in New York City and water cascades over the Elakala Falls in West Virginia; 'The South Caribbean,' where a view of valleys in Puerto Rico is seen from the opening of Cueva Ventana and waves crash onto a pier in the Outer Banks, North Carolina; and 'The Midwest Central Plains,' where a rainbow arches over a wheat field in Kansas and tourists balance on slanted glass to marvel at the view from the 360 Chicago Observation Deck. Celebrities (and some scholars) provide brief but moving commentary on their connection to each state, such as James Earl Jones on Michigan, 'a place where a young boy can find his true voice' and Tara Westover on Idaho, who notes 'home is not so much a place as a lens through which we perceive the world.' This is a rewarding visual journey."—Publishers Weekly

"This outstanding collection meets the high standards that readers have come to expect from National Geographic, providing a wonderful representation of the country’s rich and diverse culture, heritage, and landscape. A stunning celebration of a country’s beauty."—Kirkus