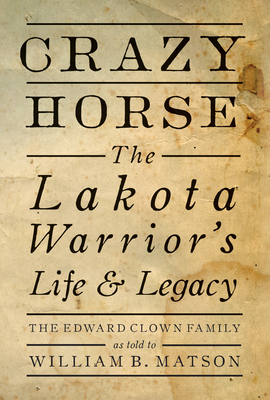 By The Edward Clown Family (As Told by), William Matson (With)

This book, written by descendants of Crazy Horse, presents an in-depth recounting of the life of the Lakota warrior and the legacy he left behind from a Native perspective.

Now in paperback, the Edward Clown family, nearest living relatives to the Lakota war leader, in conjunction with William B. Matson, presents the family tales and memories told to them about their famous grandfather. In many ways the oral history differs from what has become the standard and widely accepted biography of Crazy Horse. The family clarifies the inaccuracies and shares their story about the past, including what it means to them to be Lakota, the family genealogy, the life of Crazy Horse and his motivations, his death, and why they chose to keep quiet with their knowledge for so long before finally deciding to tell the truth as they know it.

This book is a compelling addition to the body of works about Crazy Horse and the complicated and often conflicting events of that time period in American History.

"A family account of the life of Tashunke Witko, their great Sioux relative . . . For the first time, the Clown family members tell their oral history."--True West

"For the first time the first-hand account of Crazy Horse is told . . . The stories were faithfully passed down through the generations . . . It includes Crazy Horse's account of the last moments of Custer and the near-killing of Maj. Marcus Reno by Crazy Horse's father."--Capital Journal

"After many years of keeping quiet, the family of Lakota warrior Crazy Horse decided to tell their story of his life and legacy . . . The truth behind the history of Crazy Horse--an iconic Native American warrior--until recently has been kept hidden for more than a century."--The Monroe News

Floyd Clown, Doug War Eagle, and Don Red Thunder are the sole administrators and spokesmen of the Crazy Horse estate and often speak at historical gatherings and national parks about their family's history. They live in DuPree, SD.William Matson has produced and directed an award-winning video, Sitting Bull's Voice, as well as the two-part video series, The Authorized Biography of Sitting Bull by His Great-Grandson, and the four-part video series, The Authorized Biography of Crazy Horse and His Family. He regularly speaks about these videos and their content at film festivals and has been working with the Crazy Horse family since 2001 to tell their story. He lives in Spearfish, SD.